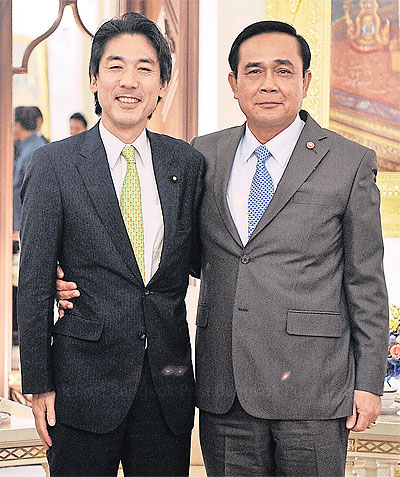 Speaking after the meeting, government spokesman Yongyuth Mayalarp said the officials had passed on a message from the Japanese prime minister congratulating Gen Prayut on becoming prime minister.

They also proposed that trilateral talks be held with Thailand and Myanmar to kick-start a Japanese investment plan in the deep-sea port project.

Mr Yongyuth said Japan is ready to help develop the Dawei zone alongside Thailand and Myanmar, while Mr Kiuchi proposed that trilateral talks are the best way to speed up Japanese investment in the scheme.

The government spokesman said Gen Prayut has pledged to promote and protect Japanese investment in the country, insisting the benefits of investments will be shared fairly and equally between all contributing stakeholders.

Such investments would be a good opportunity for Japan to build ties with Asean and open the way for Japanese trade and business in the countries, he said.

Mr Yongyuth added that Gen Prayut had explained the political situation in the Thailand to the Japanese minister.

The premier told him about the National Council for Peace and Order's role and said the interim government will move Thailand towards the final phase of his national reconciliation "road map".

During the meeting, the prime minister expressed his condolences over Japan's worst volcanic eruption last Saturday that left scores of people dead and injured.

The officials also discussed the 127-years of diplomatic relations between the two countries and their cooperation at all levels.

Gen Prayut called on Japanese people to visit Thailand, particularly during the tourist high season and festivals. Japan has promised to coordinate with relevant agencies to promote Thai tourism in the country, Mr Yongyuth said.

The Japanese prime minister has invited Gen Prayut to pay an official visit to Japan, the spokesman said. The premier is considering a suitable date for the trip and might visit the country by the end of this year.

Gen Prayut has meanwhile accepted the Myanmar government's invitation to visit the country on Thursday and Friday next week.

The premier said the Dawei deep-sea port development project will be up for discussion during the official visit.

The prime minister has also confirmed he will attend the 10th Asia-Europe Meeting in Milan, Italy from Oct 16-17. Leaders from 51 Asian and European member states will attend.