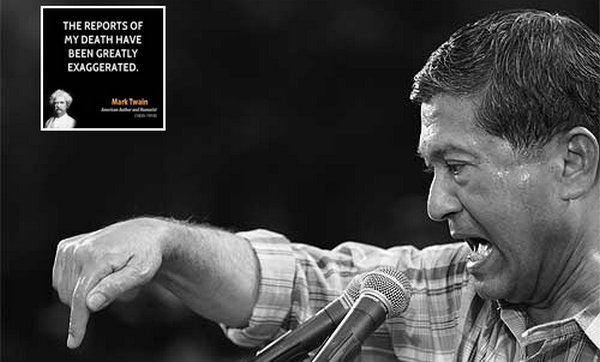 Still kicking: Thailand's political bad boy Chalerm Yubamrung says he is not ready to go down there just yet. Like Mark Twain, he was forced to appear in public Sunday to claim that reports of his death were exaggerated. The source of the rumours of Mr Chalerm's death is unknown, but the Manager website gave them large prominence before being forced by events to backpedal. (File photo by Pattanapong Hirunard)

Mr Chalerm told reporters he is "in perfect health" because he has started a daily regime of physical exercise.

Rumours about the alleged death of the controversial politician have been doing the rounds on the social media for several months.

Mr Chalerm has been keeping a low profile since he underwent an operation last year for an acute subdural hematoma, which is a type of brain hemmorrhage.

He claimed Sunday that people are trying to lure him into speaking about politics, but insisted he would not pay them any attention. He said he would refrain from talking about politics for the time being, despite receiving invitations to talk at numerous events.

"I have been in politics long enough to know I should not attempt to swim against the tide," Mr Chalerm said.

He said the next public event he plans to attend will be the funeral of former Pheu Thai MP Apiwan Wiriyachai, who died of a lung infection in exile in the Philippines last week.

He said he will take part in Aphitham prayers for Apiwan on Thursday and the royally-sponsored cremation on Saturday.

Earlier in the day, rumours had said the funeral of Mr Chalerm would be held Sunday afternoon at Wat Bang Bon temple.

"I spoke to him on the phone on Saturday. Mr Chalerm is in excellent health because he had been doing regular exercise. He is still enjoying the odd sip of wine as usual," Mr Anan said.

"I really have no idea what message those spreading the rumours want to convey but I want them to stop."