Five weapons suspects in connection with attacks at Kok Wua intersection during the 2010 red-shirt protests have recanted their confessions, saying they were coerced during interrogations.

Vinyat Chartmontri on Tuesday led a number of lawyers from the Free Thai Legal Aid group to submit a letter to Kamol Thammaserikul, director general of the Attorney General's Office, to seek justice for the five "men in black" who had been charged with possessing arms.

They claimed they had been physically abused and coerced into confessing. 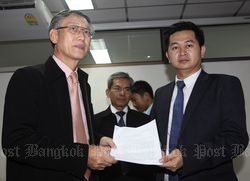 Mr Vinyat (right) gives Mr Kamol the letter at the Attorney General's of Office in Bangkok on Tuesday. (Photo by Tawatchai Khemgumnerd)

The lawyers also said since the case involved political protests, it was considered a special case that should have come under the jurisdiction of the Department of Special Investigation, not the Crime Suppression Division.

The letter also asked prosecutors to not oppose their requests for bail and to order a new investigation.

Mr Kamol said the DSI had asked for the case on Sept 30 for further investigation.

Once it is done and the case is sent back, it will be handled by special-case prosecutors, he added.

He also said he would coordinate with the attorney general for further action.