Khon Kaen: All 26 defendants facing terrorism charges for their alleged ties to a militant red-shirt group pleaded not guilty yesterday after appearing in the military court for the first time. 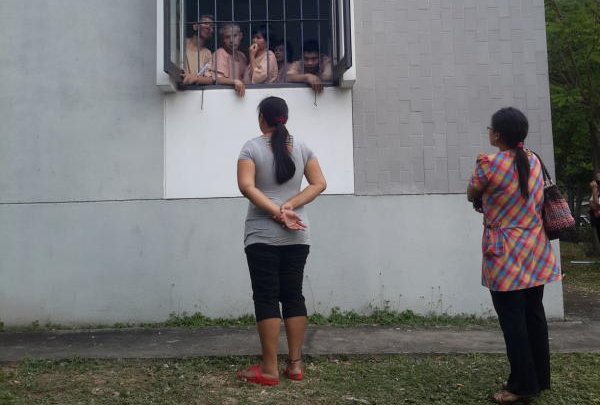 Relatives and friends were able to contact accused members of the alleged "Khon Kaen model" plot for the first time in five months when all 26 defendants were brought to the military court - where they face the death penalty. (Photo by Nanchanok Wongsamuth)

Scores of relatives started arriving at dawn to greet the suspects at the Khon Kaen court. The suspects have been held in military custody for five months.

The suspects allegedly involved in the "Khon Kaen model", so called because prosecutors allege they intended to create a model for red-shirt resistance, were formally charged with nine counts on Aug 22.

The defendants have been imprisoned since their arrests in late May. The military has repeatedly requested the courts extend their detention.

They denied all charges, including that they violated National Council for Peace and Order (NCPO) directives banning public gatherings of more than five people, as well as amassing arms, conspiracy to commit terrorist acts, associating with terrorists and acting to protect fellow conspirators.

The firearms charge carries a maximum sentence of death. In a military court, no appeal is possible if convicted.

The International Commission of Jurists, which has stressed that civilians should not be tried in military courts, was present during the hearing.

Benjarat Meetian, a lawyer representing 15 of the defendants, yesterday asked the court to consider moving the case to the civilian court.

"The crimes alleged to have been committed occurred before the NCPO issued orders which transferred certain crimes to the military court," she said.

On May 25, the NCPO issued an order that empowered military courts to try cases against civilians suspected of committing lese majeste and internal security offences.

The suspects were arrested and detained on May 23, but the NCPO order was published in the Royal Gazette on May 30, Ms Benjarat said.

The court will make a decision on Dec 24, before setting the next hearing date to examine witnesses.

Winyat Chatmontree, secretary of Free Thai Legal Aid (FTLA), whose lawyers are representing 11 of the suspects, said the only possibility that the case will be moved to a civilian court is if martial law is revoked, or if the NCPO order on May 25 is amended.

The FTLA filed a second bail request with the court on behalf of the 11 suspects yesterday, which was again rejected by the court.

Lat (assumed name), the daughter of one of the suspects, Denchai Wongkranuan, believes her father is innocent and hopes he will be released. But she is concerned about his being indicted in a military court. Since the suspects were detained, lawyers have not been granted access to police evidence, which is considered confidential.

"I thought the military would be straightforward and fair," Ms Lat said. "But now, I don't think the military and the red shirts are on the same track. Because if there is no wrongdoing, my father should have been released." 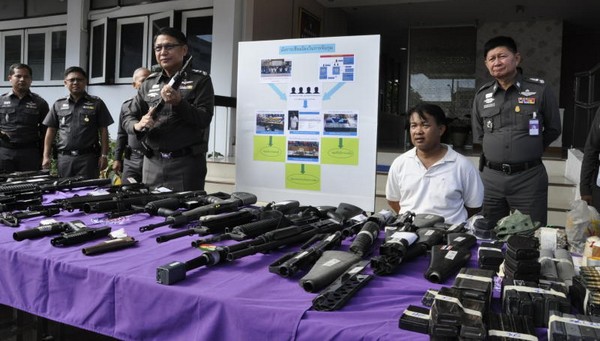 The case against the Khon Kaen 26 stems from this seizure of arms by a joint police-military team. The military claims that this is an "arms shipment" that can be traced back to Jakrapob Penkair. (Photo by Prasit Tangprasert)

On May 23, the army arrested 22 red-shirt activists, seven allegedly with arms and explosives, at a hotel in Khon Kaen province. Officers seized bombs, bullets and photos of red-shirt leaders, and alleged that the suspects were planning a terrorist act. Four others were arrested after being implicated by the suspects. Somewhere between 10 and 20 people have been arrested in other provinces on similar grounds.

The 26 suspects from Khon Kaen have been held in military custody for five months and encouraged to produce names of further members of their "movement".

At the time of the arrests, Maj-Gen Thawat Sukplang, who was deputy commander of the Second Army Region, said the "model" was to be used later to create havoc in Nakhon Ratchasima, Chaiyaphum, Kalasin and Surin provinces.

He said the mastermind of the Khon Kaen model lives abroad. While Maj-Gen Thawat gave no names, it is believed he was referring to Jakrapob Penkair, who is wanted by the army on alleged arms smuggling charges.

The Khon Kaen Model is widely disbelieved in the Northeast. According to the online Isaan Record, which is published in Khon Kaen, "Red shirts here believe that the military may be wrongly framing peaceful Red Shirts as violent terrorists in a high-profile legal case, which could set the stage for a wider crackdown on Red Shirts in the region".