Consideration of a request for the impeachment of former prime minister Yingluck Shinawatra for alleged dereliction of duty in failing to stop corruption and losses in her government's rice-pledging scheme has been placed on the National Legislative Assembly (NLA) agenda for Nov 12. 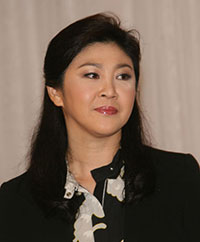 NLA president Pornpetch Wichitcholchai said on Wednesday that he had received the impeachment petition submitted by the National Anti-Corruption Commission (NACC) on Oct 14.

The NACC has accused Ms Yingluck of violating Section 178 of the 2007 constitution and Section 58 of the anti-corruption.  The anti-graft agency and recommended her impeachment in line with Section 270 of the charter.

Mr  Pornpetch said he and the NLA whip have carefully studied the petition, which contains hundreds of pages of documents, and concluded that  although the 2007 constitution has been scrapped, her impeachment could still be sought under the organic laws on national administration and the NACC, which are still  effective.

The NLA president said he ordered the impeachment request be put on the agenda of a special meeting of the NLA on Nov 12.

Copies of the impeachment petition have already been sent to the former prime minister and all NLA members, he said.