Khon Kaen students in t-shirts with an anti-coup message give the anti-coup salute in front of Prime Minister Prayut Chan-o-cha's stage in Khon Kaen.

KHON KAEN - Five students from Khon Kaen University welcomed Prime Minister Prayut Chan-o-cha to the province on Wednesday with an anti-coup message before being whisked away by police.

The five students of the law faculty were among an audience at the provincial hall to listen to a speech by the prime minister during a trip to launch a campaign against drought in the northeastern region, which also includes Kalasin. 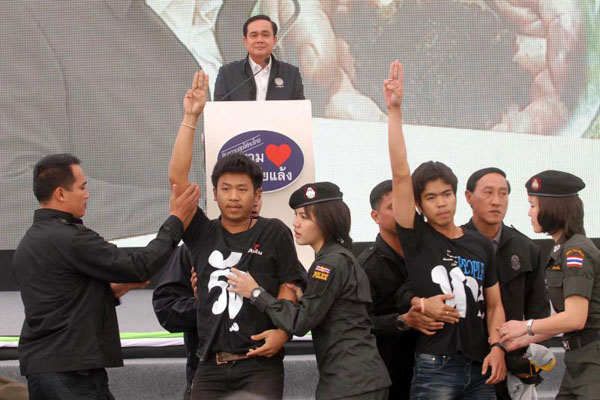 Khon Kaen University students protest against the May 22 coup in front of Gen Prayut Chan-o-cha's stage at the Khon Kaen provincial hall on Wednesday. (Photo by Chanat Katanyu)

Standing about 10 metres from the podium, the five wore shirts covering t-shirts emblazoned with an anti-coup message. When the prime minister began speaking, they took off the outer layer to show Gen Prayut in a move that stunned police and soldiers guarding the venue.

The message on each of the five t-shirts reads: ''We-are-against-the-coup''.

Gen Prayut appeared undisturbed and said from the stage: ''Anybody want to protest?" and garnering applause from the audience. He suggested they and others lodge their complaints to the Dhamrongtham centre set up in every province to accept grievances, then continued his programme.

"I'm coming here with 100% good intentions and hope to go back by winning over hearts,'' the prime minister added.

The five students also gave the general the three-finger salute from the Hunger Games series of movies before being whiskered away by police and soldiers to the Sri Patcharin military camp in Muang district. A security official said they were detained at the camp for "attitude adjustment."

The Hunger Games salute was widely used as a symbolic gesture against the May 22 after the army took power from the previous government. 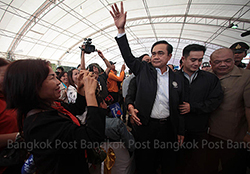 Prime Minister Prayut Chan-o-cha waves to supporters waiting for him at the Khon Kaen provincial hall on Wednesday. (Photo by Chanat Katanyu)

Gen Prayut said before departing for Khon Kaen that there were people who had different opinions and he was open for criticisms. Those opinions were on display in anti-coup leaflets scattered around Khon Kaen before the premier's arrival.

The general said he needed to visit the region to inspect water-distribution networks that have caused frequent water shortages. The region he visited has serious water problems and Thailand was bracing for a severe shortage next month, he said.

Gen Prayut talked to supporters at the provincial hall before leaving for a visit in neighbouring Kalasin province.

The trip was taken under heavy security, with 1,000 police, soldiers and defence volunteers guarding the venue to ensure safety for the prime minister. More measures were taken after the brief student protest.

Khon Kaen is also a political base for the United Front for Democracy against Dictatorship and supporters of former premier Thaksin Shinawatra and the Pheu Thai Party.