PT: Prayut should stay in Bangkok

Prime Minister Prayut Chan-o-cha should not spend time visiting the Northeast and instead concentrate on supervising planned legislation, national reform and the drafting of the new constitution, prominent Pheu Thai member Amnuay Khlangpha said on Wednesday. 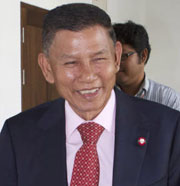 Mr Amnuay said Gen Prayut did not need to visit Khon Kaen and Kalasin on the same day. He could have assigned cabinet ministers to visit the region instead.

The prime minister should stay in his office in Bangkok and  make sure that the National Legislative Assembly, the National Reform Council and the Constitution Drafting Committee do their jobs properly in implementing his  government's reform roadmap.

That would ensure the next general election actually occurs in the near future, the former Lop Buri MP said.

He said the small anti-coup protest in Khon Kaen during Gen Prayut's visit was not a direct challenge to the prime minister. The Pheu Thai Party was being cooperative and would not stage a political rally at this time because it wanted to help national reconciliation.

He also said martial law should be lifted.

Swiss voters refuse to rein in immigration from EU

GENEVA: The Swiss have rejected a bid to dramatically reduce immigration from the EU, but have embraced offering paid paternity leave for the first time, projections from several votes in the country Sunday showed.