The government looks set to open a forum where students can legitimately air their views on reform, following a series of anti-coup protests by student groups from several major provinces. 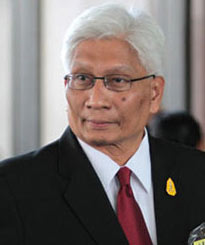 Suwaphan Tanyuvardhana, above, says the government will open a forum for students to air their views on national reform. (Photo by Chanat Katanyu)

Activities could be held if the organisers have good intentions, not have a hidden agenda or any ulterior motives, said Mr Suwaphan.

Prime Minister Prayut Chan-o-cha has floated an idea to open a forum for students and he recently instructed the National Reform Council (NRC) and  King Prajadhipok’s Institute (KPI) to study a suitable format to hold a forum for students to contribute their knowledge and abilities to the national reform process.

The format of the forum is expected to be known in the next few days, said the minister. He saw it unnecessary to relax any rules as the NRC could hold a forum under a special law.

He shrugged off speculation the planned forum might be aimed at preventing students being used as a political tool to put pressure on the military government. He said Gen Prayut had never prohibited students from holding political activities, but they should take into their account the suitability of such protests.

The government and the National Council for Peace and Order (NCPO)  could control the situation and the government’s panel on national security has assessed the political situation every three month, said Mr Suwaphan.

Army chief Udomdej Sitabutr, in his capacity as deputy defence minister and secretary-general to the NCPO, on Tuesday warned that any anti-coup or anti-government activities must stay within the law.

The majority of people were leading normal lives, but certain groups of people were trying to ignite political issues, said Gen Udomdej. Efforts were being made to create a better understanding with those protesters.

Authorities were working out ways protesters could express their views,  such as through a legitimate  forum, he said.

NRC chairman Thienchay Kiranandana said on Tuesday that the NRC stands ready to organise a forum for students to express their views. He said it could be held in mid-December, and the NRC was already looking for an appropriate venue.

However, he could not guarantee the forum, if held, would cool down anti-government protests, but he would try his best.

The NRC chairman said such a forum would not  violate martial law as it would not be a political gathering, but rather an opinion-gathering session with  agencies from the government and national security authorities also taking part.

The planned forum follows anti-coup protests by groups of students from Bangkok and other provinces.

On Monday, eight  students from the League of Liberal Thammasat for Democracy (LLTD) were taken away for questioning by police after distributing anti-government leaflets outside Thammasat University.

The leaflets contained a satirical poem by the late political activist Jit Pumisak. The students were earlier prevented from distributing the leaflets inside the university by guards, who called Chana Songkhram police.  Police detained them for "attitude adjustment",  releasing them later.

Earlier,  five members of Khon Kaen University’s Dao Din student group flashed the three-finger salute at Gen Prayut while he was delivering a speech during his visit to the province last week.  They were detained and discharged a few hours later.