Defence Minister Prawit Wongsuwon said on Thursday that elections would likely be delayed until 2016, after military officials recently ruled out lifting martial law any time soon. 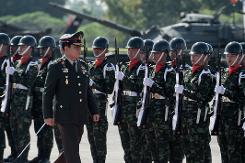 Thailand PM Prayuth Chan-O-Cha at a military parade marking his retirement as commander in chief of the Royal Thai Army at the Chulachomklao Royal Military Academy in Nakorn Nayok on September 29, 2014

Prime Minister Prayut Chan-O-Cha had previously said his government hoped to hold fresh polls around October 2015, once the drafting of a new constitution was completed.

"We think so," he told reporters when asked if the poll would be held in 2016.

"If the constitution is ready, the election will be held by that time," he added.

Gen Prawit was speaking after Finance Minister Sommai Phasee gave an interview to the BBC late Wednesday saying any return to democracy was unrealistic before mid-2016.

"As announced by the prime minister, it would take about one year. But, from my feeling, I think it may take, maybe, a year and a half," he told the British broadcaster.

Mr Sommai said he had spoken to Gen Prayut about the feasibility of holding polls as recently as last week.

The confirmation from senior government figures of a likely election delay comes days after a junta official told AFP martial law would only be lifted when the country "has peace and order".

Martial law -- imposed by the army two days before the coup -- bans political gatherings, allows the detention of dissidents for up to seven days without charge, and permits trials in a military court.