The Office of the Attorney-General on Friday resolved to indict former prime minister Yingluck Shinawatra over the corruption-plagued rice-pledging scheme. 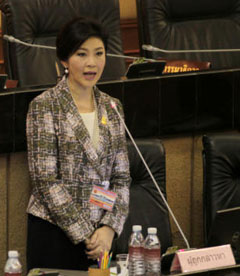 Surasak Trirattrakul, director-general of the OAG's Litigation Department, disclosed that Attorney-General Trakul Winitchayapak already signed an order to prosecute Ms Yingluck for failing to halt the programme after the anti-graft agency found irregularities in it.

The OAG made its decision to take Ms Yingluck to the Supreme Court's Criminal Division for Political Office Holders even as the National Legislative Assembly prepared to vote on impeachment motions against her and her top lieutenants, former House speaker Somsak Kiartsuranon and former Senate speaker Nikom Wairatpanij.

Ms Yingluck is accused of dereliction of duty over the loss- and corruption-ridden rice-pledging scheme.

On Tuesday, National Anti-Corruption Commission (NACC) secretary-general Sansern Poljeak said the joint working committee of the NACC and OAG had agreed at its last meeting to press criminal charges against Ms Yingluck for her alleged dereliction of duty, which allowed alleged irregularities in the rice programme to continue, leading to massive state losses.

Mr Sansern said the committee submitted the recommendation to the attorney-general. Santanee Ditsayabut, deputy spokeswoman for the OAG, on Wednesday had denied claims by the NACC that representatives from both agencies reach a conclusion.

The OAG and the NACC merely discussed new information the NACC had obtained from witness testimonies collected over the past few weeks following the OAG's request, Ms Santanee said.

In December, the joint working team had to put off its decision following a complaint made by prosecutors that the NACC's investigation reports were incomplete because of conflicting points. Lawyers asked the NACC to gather additional information from witnesses regarding government-to-government rice deals. 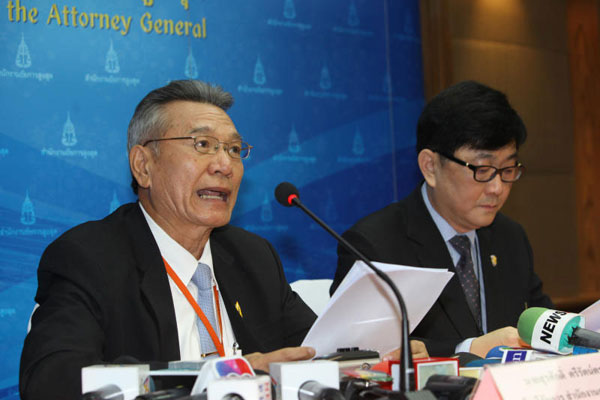 Surasak Trirattrakul, left, director-general of the OAG's Litigation Department, announced the decision of the attorney-general on Friday. (Photo by Tawatchai Khemgumnerd)