Army chief Udomdej Sitabutr on Monday warned Panthongtae Shinawatra, the only son of fugitive former prime minister Thaksin Shinawatra, that he should not make "problematic comments" on the social media.

Gen Udomdej, who is also deputy defence minister, was responding to an online message that Mr Panthongtae posted on Friday.

The message, "Are you ready? Are you ready, Thai people?" was posted on Mr Panthongtae's Instagram account following the impeachment of his aunt Yingluck Shinawatra by the National Legislative Assembly (NLA). The image attached to the brief message was a symbol of a clenched fist.

The warning by Gen Udomdej was given to Mr Panthongtae and also to leaders of red-shirt demonstrators who back Thaksin. He said that problematic comments should not be posted as they could grow and lead to incitement. 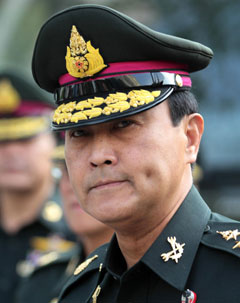 Gen Udomdej called on all parties to make only proper comments on the NLA's impeachment vote. The country was following its roadmap to peace, he said.

The army chief denied that the authorities were about to call anyone in for a talk in relation to the matter.

The decision by the NLA had nothing to do with the National Council for Peace and Order, or to any alleged attempt to block the Thaksin regime, Gen Udomdej said.

He also confirmed the NCPO has not prohibited Ms Yingluck from going abroad and said there were no signs of any serious situation after the impeachment. The army chief urged all parties to love the nation.

On Friday the NLA retroactively removed Yingluck from the office of prime minister for dereliction of duty in failing to act to rein in the huge losses and corruption in her government's rice-pledging scheme. The scheme caused losses totalling over 500 billion baht to the state. Her political rights were also suspended for five years.

The impeachment motion was brought by the National Anti-Corruption Commission under the State Adninistration Act.

Ek-Chai Distribution System Co, the operator of Lotus's retail stores, looks set to allocate 3 billion baht to open its next-generation stores over the next three years.