The United States has repeated its call for Thailand to lift martial law and that the government continue its efforts to complete its road map to reform, according to Foreign Ministry spokesman Sek Wannamethee. 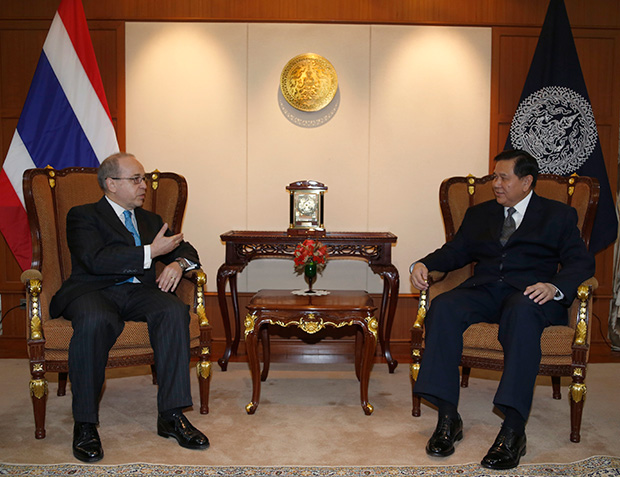 Mr Sek said US Assistant Secretary of State for East Asian and Pacific Affairs Daniel Russel made the point during his meeting with  Deputy Prime Minister and Foreign Minister Tanasak Patimapragon on Monday.

Mr Russel's visit is part of his tour of  the Southeast Asian region, and the first visit by a high-level US official to Thailand this year.

Mr Sek said the two sides reaffirmed intentions for continued cooperation and relations, as Thailand has been a firm US ally in this region for over 180 years.

They agreed to join in tackling future challenges and in combating transnational crime, terrorism, drug trafficking, human trafficking and the spread of epidemics such as Ebola.

"The deputy prime minister informed Mr Russel of the situation in the country and Thailand's determination to accomplish its road map to reforms, while the US expressed its wish to see full participation by all sides in the counry's reform process and repeated its call for the Thai government to lift martial law," said Mr Sek.

He added that the impeachment of former prime minister Yingluck Shinawatra was not discussed during the meeting.

He also told Mr Russel Thailand would complete its trafficking in persons report (TIP report) and forward it to the US by the end of January, according to Mr Sek.

Mr Russel later went to Chulalongkorn University where he delivered a speech on the US role in Asia and the Pacific in 2015.

In part of his speech, Mr Russel said the current Thai political situation is an important variable in  international relations. The Associated Press quoted him as also calling for a "broader and more inclusive" political process.

"The United States does not take sides in Thai politics. We believe it is for the Thai people to determine the legitimacy of the political and legal processes," Russel told students. "We're also particularly concerned that the political process doesn't seem to represent all elements in Thai society."

Mr Russel said he had separate meetings with former prime minister  Yingluck Shinawatra, Democrat Party leader Abhisit Vejjajiva and Gen Tanasak  on Monday morning. He had learned that all sides attached importance to reconciliation and laying the groundwork for future democracy.

He stressed  US respect for Thailand and insisted Washington would not take sides with any of the groups in conflct.  However, the US was  concerned about the restrictions on the right of expression and political gatherings.

He said justice plays an important part in reconciliation.  The impeachment and polical ban imposed on an elected Thai leader, who also faces criminal charges, had led the world community to feel that Thailand's reconciliation efforts could be affected, Mr Russel said.

Therefore, the US wanted an assurance that Thailand would proceed with its reconciliation efforts and ensure genuine justice in the Thai judicial system, Mr Russel said.

AP reported that Mr Russel, the highest-level U.S. official to visit Thailand since the coup, called for a "broader and more inclusive" political process.

"The United States does not take sides in Thai politics. We believe it is for the Thai people to determine the legitimacy of the political and legal processes," Russel told students at Bangkok's Chulalongkorn University.