US warns on political 'fairness'

The first senior US envoy to visit Thailand since the May 22 coup last year voiced grave concerns Monday over the political situation in the country, particularly judicial standards, curbs on freedom, and martial law.

Ex-premiers Abhisit Vejjajiva and Yingluck Shinawatra agreed with Foreign Minister Gen Tanasak Patimapragorn that all sides must work together for reconciliation and democratic goals. (Photo by US State Department)

Speaking at a conference on US engagement in Asia held at Chulalongkorn University, Assistant Secretary of State for East Asia and Pacific Affairs Daniel Russel raised worries about judicial fairness, which is part of the process to promote political reconciliation.

Mr Russel said the perception of fairness, or lack thereof, would affect Thailand's position in the international community.

"When an elected leader is deposed from office, then impeached by the authority that implemented the coup — and is being targeted with criminal charges while basic democratic processes and institutions are interrupted, the international community is left with the impression that these steps could, in fact, be politically driven," he said, without identifying any leader in particular but clearly referring to former prime minister Yingluck Shinawatra who was impeached by the coup-installed National Legislative Assembly (NLA) last week.

Mr Russel discussed political issues with Ms Yingluck, Democrat Party leader Abhisit Vejjajiva, and Foreign Minister Tanasak Patimapragorn and all of them emphasised the importance of reconciliation and working towards the same democratic goal.

However, Mr Russel insisted the US does not take sides in Thai politics but it is concerned about restraints on freedom of speech and public gatherings.

"I understand that this is a very sensitive issue, and so I bring it up with humility and respect for the Thai people.

"The US does not take sides in Thai politics. We believe it is for the Thai people to determine the legitimacy of their political and legal processes. But we are concerned about significant restraints on freedoms since the coup, including restrictions on speech and assembly," he said.

Washington's envoy also conveyed the US administration's worries regarding significant curbs on freedoms since the military putsch. 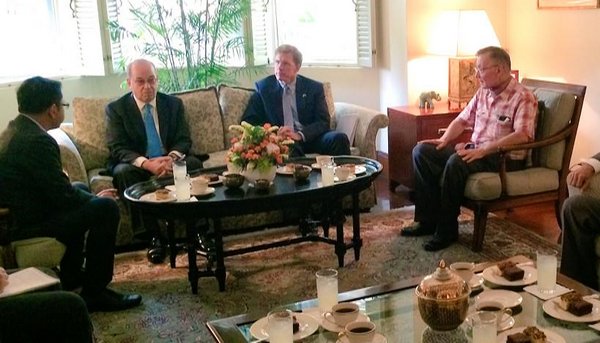 Ending martial law throughout the country and removing restrictions on speech and assembly would be important steps towards a genuinely inclusive reform process which would reflect the broad diversity in the country, he said.

Regarding the reform process, Mr Russel called for a more inclusive political reform process to incorporate all components of Thai society. He insisted that only a truly inclusive reorganisation of the political system could lead to reconciliation and subsequently, long-term stability.

Mr Russel said the US administration hopes to see a political process which would reinforce the confidence of the Thai people in its government as well as judicial institutions that build confidence internationally. These moves would show that Thailand is moving towards a stable and participatory democracy.

The US envoy, however, reaffirmed the nations' long-standing relations, even though they were affected by last year's coup. "Our relationship with Thailand has been challenged by the military-coup that removed a democratically-elected government eight months ago," Mr Russel said.

However, Thailand is a long-time friend and an important ally of the US and both countries have a long-standing history of broad cooperation in a wide range of issues, he said.

The US has a huge interest in Thailand's success, he added.

Earlier in the day, Mr Russel and Gen Tanasak, the foreign minister, held a meeting where Mr Tanasak, under instructions from Prime Minister Prayut Chan-o-cha, tried to convince the US that Thailand is on the path to democracy.

Foreign Ministry spokesman, Sek Wannamethee, said after the meeting that Gen Tanasak explained to the US envoy that martial law is still necessary to maintain peace and order. Gen Tanasak also maintained that the country is following its democratic roadmap.

"The US envoy reaffirmed the US-Thai diplomatic relationship and engagement in several issues which have received international concern such as transnational crime, terrorism and deadly epidemics," Mr Sek said.

The Foreign Ministry spokesman said the impeachment of Ms Yingluck was not discussed in the meeting.

Gen Prayut, meanwhile, played down the visit saying the US had every right to send envoys to foreign countries. He has also learned that the new US ambassador to Thailand will arrive next month. "I think the US can differentiate between what is happening here. We are still doing business together while the military drill [Cobra Gold] is on schedule," Gen Prayut said.

"We have to jointly explain the reason and necessity for the coup and why we have this government to run the country. Thailand has faced a number of political problems and protests for years. If we'd ignored the problems, the situation would worsen and more people would have lost their lives," Gen Prayut said.

Thitinan Pongsudhirak, a professor at Chulalongkorn University, said the level of US-Thai engagement remains limited amid the current political situation. "Many of the things the assistant secretary of state said are not new to us," he said.

Mr Thitinan is a frequent contributor to the Oped page, Bangkok Post.