NLA invites US diplomat for talks

Mr Russel meets Foreign Affiars Minister Tanasak Patimapragorn at the ministry during his visit to Thailand on Jan 26, 2015. (File photo by Apichart Jinakul)

The National Legislative Assembly (NLA) has invited the highest-ranking US diplomat in Thailand to answer questions in parliament on Feb 11. 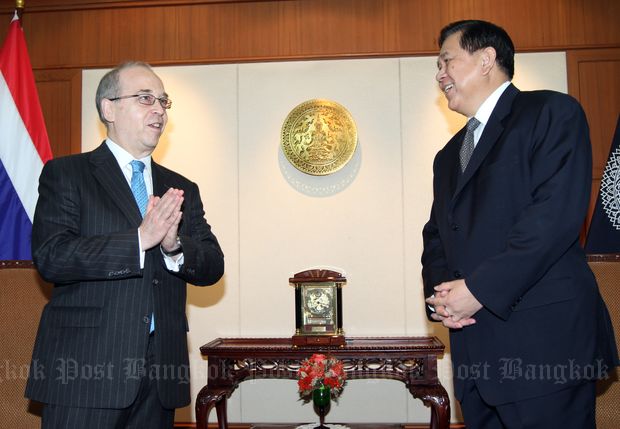 The NLA has sent the letter to Patrick Murphy in hopes that he will clarify comments made by a visiting US State Department official earlier this week, said Kitti Vasinont, an NLA member vice-chairman of the foreign affairs committee.

Daniel Russel, the US Assistant Secretary of State for East Asian and Pacific Affairs, caused a furore after calling for an end to martial law and making other remarks seen as critical of the country's leadership.

Mr Murphy, the charge d'affaires at the embassy in Bangkok, has not yet replied to the letter from the NLA. Earlier this week he was subjected to a stern lecture by Deputy Foreign Minister Don Pramudwinai about the comments made by Mr Russel.

Washington has not replaced its ambassador in Bangkok since Kristie Kenney's term ended last year, as a signal of its disapproval of the May 22 military coup.

"We plan to ask Mr Murphy about what Mr Russel had said because his speech made Thais feel uneasy and 'wounded Thais' hearts', to quote the deputy foreign affairs minister," said Mr Kitti.

"We'd like to hear what the charge d'affaires has to say about it."

The NLA also wanted to ask Mr Murphy to confirm whether US embassy staff were meeting leaders of the red shirts in the Northeast and, if so, why.

"Although Thailand is a free country, I think now is a special circumstance," said Mr Kitti. "If they [embassy staff] really did so, it might have political repercussions.

"I find such a move inappropriate at this time. Personally, I'd like them to review the plan because it will hamper the ongoing reconciliation process."

However, Mr Kitti said the current difference of opinion with the United States would not affect longer-term bilateral ties.

"The US still wants to nurture the relationship but it might have made a wrong move and said something [inappropriate] in public," he said.

During his visit to Thailand, Mr Russel urged the military government to support an "inclusive political process" for Thailand.

In his speech at Chulalongkorn University on Jan 26, he also stressed the importance of "the perception of fairness".

"... When an elected leader is removed from office, is deposed, then impeached by the authorities — the same authorities that conducted the coup — and then when a political leader is targeted with criminal charges at a time when the basic democratic processes and institutions in the country are interrupted, the international community is going to be left with the impression that these steps could in fact be politically driven," he said.

Three days earlier, the junta-appointed NLA had impeached former prime minister Yingluck Shinawatra in a 190-18 vote for dereliction of duty in connection with her government's rice-pledging programme. The Office of the Attorney General also said it would press criminal charges against her with a maximum penalty of 10 years in prison.