National police chief Somyot Pumpunmuang is confident that, with many pieces of evidence in hand, authorities soon will issue warrants for the arrest of those responsible for the two bombs that exploded in front of Bangkok’s Siam Paragon shopping mall Sunday night. 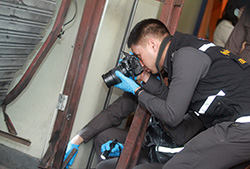 Speaking at a press conference Monday, Pol Gen Somyot said that the police would not rule out any possible motives for the bombing, including politically driven intent to create tension and chaos among the public.

Asked whether it would be necessary for soldiers to support police operations, Gen Somyot said he did not believe so.  He added that he was considering putting more officers in plainclothes to ease public anxiety about large numbers of uniformed police.

Pol Gen Somyot noted that officials have agreed to make Pol Lt Gen Prawut Thawornsiri, the police spokesman, the only person to provide future information on the progress of the investigation.

Political activists demand a House dissolution and call on voters to support the "democracy camp" and prevent senators having a say in the election of a prime minister.

Police said 31 people were confirmed killed by a former policeman who burst into a child care centre in Na Klang district of Nong Bua Lamphu on Thursday.