Prime Minister Prayut Chan-o-cha Monday sent a clear message to the Japanese government, its business leaders and the media that elections would be held in Thailand at the end of this year or early next.

This was a consistent theme laid out by Gen Prayut during his string of meetings, which ended with bilateral talks with his counterpart Shinzo Abe.

At the end of their 45-minute talks, the two leaders issued a joint statement covering politics and security, people-to-people exchanges and co-operation on regional and international issues. Speaking to reporters after the meeting, Mr Abe said he hoped reconciliation would occur and democracy would return to Thailand swiftly.

At the same press conference, Gen Prayut thanked Japan for its concern and reiterated the same message he had given earlier to the Japanese business federation Keidanren - that elections would be held at the end of this year or early 2016.

"I promise that Thailand will return as a strong nation," he said. 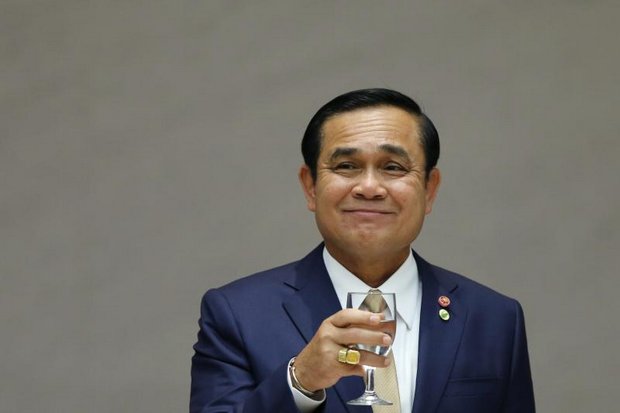 Prime Minister Prayut Chan-o-cha appeared pleased after a morning meeting and lunch at the Japan Business Federation (Keidanren) to kick off the business part of his three-day official visit to Japan. (Reuters photo)

During their talks, Mr Abe praised Gen Prayut for his leadership, a government official attending the meeting told the Bangkok Post.

Earlier in the day, Japanese business leaders raised the issue of "a return to civilian leadership".

Gen Prayut assured Mr Abe he had no intention of retaining power, even after elections.

He went into considerable detail about the process, as he had with Japanese business leaders earlier.

Once the charter is completed in September, it will take several months for organic laws to be passed and polls would be held at the end of the year or early in 2016.

All is going according to the roadmap, although martial law is still necessary to maintain order, Mr Abe was told.

Both leaders witnessed the exchange of a Memorandum of Intent (MOI) on future cooperation in developing Thailand's railways.

The MOI was inked earlier in the day between Transport Minister ACM Prajin Juntong and Akihiro Ohta, Japan's Minister of Land, Infrastructure, Transport and Tourism.

The development will either focus on the improvement of existing metre-gauge lines or the development of new standard-gauge ones.

Both Thai and Japanese ministries will continue to explore possible technical cooperation, including technical transfers on the railway sector.

In order to improve rail connectivity with neighbouring countries in the Southern Economic Corridor from the East to West, both ministries would also cooperate on research and study on railway development of three routes - Kanchanaburi-Bangkok, Bangkok-Chachoengsao-Aranyaprathet and Bangkok-Chachoengsao-Laem Chabang.

The MOI also states that a "study on the feasibility of cooperation" on rail freight services in Thailand would be conducted.

Both ministries welcomed the "ongoing cooperation" on the development of the mass transit railway system in Bangkok - the Purple and Red lines.

A joint steering committee at the ministerial level will be set up to oversee the implementation of the MOI.

At the end of last month, Thailand and China agreed on the construction of the dual-track system on the Nong Khai-Map Ta Phut-Bangkok-Kaeng Khoi route, totalling 873 kilometres.

It is not clear how long the Japanese would take to conduct their study, but an informed source said that it is possible the government would allow the Japanese first pick of one of the routes before opening the others to bidding.

In their joint statement, Gen Prayut outlined Thailand's initiative to establish the first of six Special Economic Zones along the borders of Cambodia, Laos, Myanmar and Malaysia as part of a national strategy to stimulate economic growth, attract foreign investment, foster development of border areas and support Asean integration.

Both sides reaffirmed the importance of promoting the Dawei Special Economic Zone in Myanmar through trilateral consultations between Japan, Thailand and Myanmar. Japan will start procedures to meet the necessary conditions for equity investment in Special Purpose Vehicles, while Thailand said it looked forward to Japan's input on the project's master plan.

Both leaders expressed "resolute condemnation over the outrageous and impermissible murders of the two Japanese nationals by the Islamic State group".

They agreed that the international community should remain united and not give in to terrorism.

Gen Prayut, in his talks with Mr Abe, praised Japan for its "proactive contributions" to peace in the region, while in the joint statement, expressed appreciation for Japan's role in working towards peace and stability in the Middle East.

Gen Prayut is scheduled to leave Tokyo Tuesday on the high-speed Shinkansen (bullet train) for Osaka, where he intends to meet with regional business leaders before returning to Bangkok.

He plans to visit Japan again in March to attend the Third United Nations Conference on Disaster Risk Reduction and again in July for the 7th Mekong-Japan Summit. 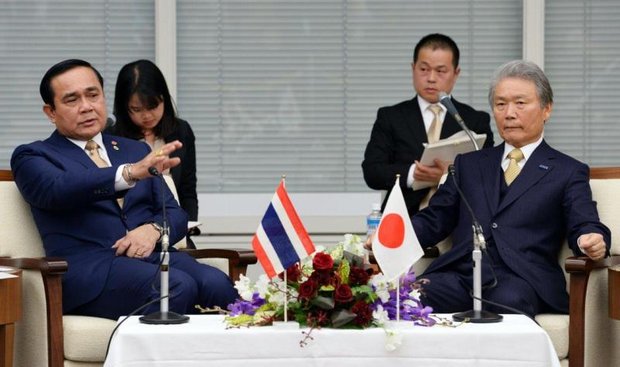