Govt seeks to extradite court grenade attack suspect from US

Four suspects who were allegedly involved in the grenade attack at the Criminal Court on March 7 are escorted by police for questioning at the Royal Thai Police headquarters. (Photo by Apichit Jinakul)

The government plans to seek the extradition of a lese majeste suspect who lives in the United States as he also faces an arrest warrant for his alleged involvement in the grenade attack at the Criminal Court.

Manoon Chaichana, aka Anek Sanfran, has become the fifth suspect for whom the Military Court approved arrest warrants on Saturday night for their roles in the RDG-5 grenade attack at the Criminal Court compound on Ratchadaphisek Road on March 7.

National police chief Pol Gen Somyot Pumpunmuang said yesterday police will work with state agencies to seek the extradition of Mr Manoon from the US.

He said the suspects worked under the Thai Alliance for Human Rights group which aims to raise public panic.

Pol Gen Somyot said the group is among 14 suspects facing arrest warrants for the court attack. Of them, 12 have been arrested. Only Mr Manoon and Weerasak Towangjorn, aka Yai Pattaya, who allegedly provided the grenade to the attackers, are still at large.

Other suspects who were arrested are Yutthana Yenpinyo, the suspect accused of throwing the grenade into the court compound; Mahahin Khunthong, who allegedly drove the motorcycle for the attack; Nattapat Onming, Mr Mahahin's wife; Thachapan Pokkhrong, Mr Yutthana's wife; Charnwit Jariyanukul; Wichai Yoosuk and Sansern Sriounruen. They are all accused of collusion in the attack. 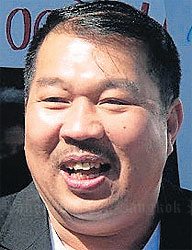 Deputy Prime Minister and Defence Minister Gen Prawit Wongsuwon admitted the process of extraditing those who fled criminal cases would take time. However, the government would seek the cooperation of the country where the suspect lives.

Mr Manoon, meanwhile, strongly denied the claim, saying that he doesn't know the group of suspects. "This is very vague information. I don't know them and have never contacted them," Mr Manoon told the Isra News Centre.

He said the accusation is part of a plot to link the grenade attack to those who live in exile in foreign countries to create hatred against them. This is because those living abroad are the only people who can fight for justice in Thailand.

Mr Manoon has lived in San Francisco for several years. He faces lese majeste charges for allegedly insulting the monarchy in video clips since 2010.

He was among several people summoned by the National Council for Peace and Order after the May 22 coup but he ignored it, saying that he is not a Thai citizen any more.

Meanwhile, soldiers from the 11th Infantry Regiment, King's Guard, have handed over four suspects they had detained under martial law to police for questioning.