An aerial view of empty land near a housing estate on the outskirts of Bangkok. (Bangkok Post file photo)

More than 500 politicians own property worth a total of nearly 25 billion baht, indicating why they are opposed to a proposed land and buildings tax, an advocacy group said.

A study carried out by Local Action Links (LocalAct), a non-profit organisation protecting farmers' land rights, showed 530 politicians held land or buildings worth a combined 24.48 billion baht. The figures were derived from public documents filed with the Office of the National Anti-Corruption Commission between 2011 and 2014.

She said the combined value of land and building held by the 530 MPs averaged 46.2 million baht each.

Ms Pongthip said the government's main justification for a property tax was so the government would have enough funds to spend on assisting the poor with no assets or farmers with no cultivation fields.

LocalAct said the data reflected the wide gap in land holdings in Thailand. The government should intervene to bring about fairer distribution of land and the land tax was a suitable tool to do that.

She said, however, if the government's aim is mainly to more fairly distribute land and not to generate revenue, those with only small and low-value plots should be exempted. That would ensure no negative impacts from the tax and bring justice to people who have few assets.

Politicians, however, are not the largest group of landlords, according to Lands Department data.

LocalAct last week issued a similar report on nationwide landholdings. It showed the Sirivadhanabhakdi family was the largest landlord in Thailand, with more than 630,000 rai, followed by the Chearavanont family (200,000 rai) and United Palm Oil Industry Plc (44,400 rai). 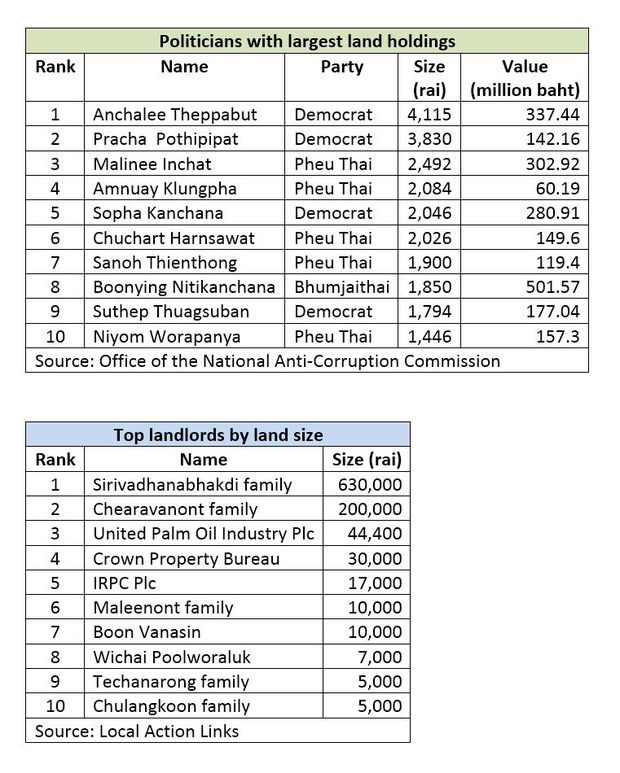