Thailand’s military junta will remain in power until it achieves its goals, or as long as violent efforts to subvert the government continue, deputy government spkesman Sansern Kaewkamnerd said Monday.

Maj Gen Sansern's remarks were in response to a prediction by well-known fortuneteller Warin Buawiratlert that Gen Prayut Chan-o-cha would stay prime minister for at least three more years. He said Gen Prayut doesn't want to stay in power longer than needed, but won't give up his post until the junta's work is done. 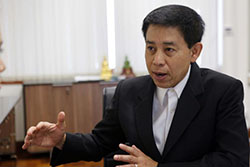 Deputy government spokesman Sansern Kaewkamnerd says the government's tenure depends on when its goals are achieved and security is guaranteed for the public. (Photo by Pattarachai Prechapanich)

"If everything progresses as planned, it will be unnecessary for the government to continue its stay in office," he said. "The prime minister has always said that this government does not desire power, but wants to work in the national interest.

"But if there are attempts to instigate disorder and provoke or obstruct the work of the government in the way that prevents national reform from progressing, ... or if there are actions that lead to turmoil and danger to officials and people, the government will have no other choices than to stand beside the people," Maj Gen Sansern said.

Under increasing international pressure to restore democracy, Gen Prayut has repeatedly said elections would be held in early 2016.

However, Maj Gen Sansern reiterated, the government "cannot abandon people and its duties because that is what all soldiers have been taught."

Since the May 22 coup d-etat, Gen Prayut has said that the military takeover was necessary to break a political deadlock, end violent street protests and institute much-needed government reform.

But pressure to restore democracy and elections has racheted up both abroad and at home in recent months, with anti-coup factions being blamed for disruptive bombings at a Bangkok shopping mall and outside the Criminal Court.

Foreign governments and the United Nations, meanwhile, have condemned the military's switch of martial law to an order authorized under Section 44 of the interim constitution giving Gen Prayut unlimited power.