Prayut: Past six months a success

Prime Minister Prayut Chan-o-cha gestures as he announces the achievements of the government at Government House on April 17, 2015. (Photo by Thiti Wannamontha)

The future of Thailand is bright and sustainable thanks to the groundwork and reform initiated by this government, according to Prime Minister Prayut Chan-o-cha.

The prime minister summarised the achievements of his government in 11 areas over the past six months on Friday morning in an address broadcast live on TV from his office in Government House.

"I might seem to be repeating myself since most of what I have to say is the same as what I mentioned in the Return Happiness to the People TV programme every Friday. But I'd really like everyone to know what a bright future Thailand will have in the years to come.

"Thailand has potential for research and development but few of the new projects have been put into practice.

"I just ordered the production of electric train cars. It's easy. We came up with several prototypes but few have been put into use. I'll see to that. From now on, research projects must be done only in pre-determined fields and they will be financed until they're successful," Gen Prayut said.

He also complained how his hard work was underappreciated but insisted he would not give up.

"The more you criticise me, the more I do and the stricter I am with laws. I've been well rested after the long holiday and I'm ready for anything," he said.

The prime minister said all issues faced by the country have improved and he was ready to use the special power under Section 44 of the interim charter for the betterment of the country.

"Once the constitution is promulgated, an election will be held. I don't want to stay long or pass the burden to the next government."

On the economic front, Gen Prayut said after hitting a trough the Thai economy expanded by 0.4%, 0.6% and 2.3% in the last three quarters of 2014 respectively and the government set up several committees and mechanisms to drive policies.

"On the economic front, short-term stimulus measures will be launched and budget disbursements will be accelerated. Things are improving. The consumer confidence index is rising and the industrial sector is expanding. This is what the Thai Chamber of Commerce told us. Foreign countries also understand Thailand's situation better after a lot of explaining," he said.

Besides tackling existing problems, the government had laid down the groundwork for sustainable development in the areas of infrastructure, transport, regional connectivity, royal projects, water management, investment promotion and special economic zones, he said.

But the deputy prime minister warned exports might shrink by 4% in the first quarter, largely due to an 11% contraction of the Chinese market. The situation, however, would likely improve in the second quarter.

He said the government had successfully stimulated the economy over the past six months, resulting in steady quarterly growth in the last two quarters of 2014 through budget expansion.

"Growth in the first quarter of 2015 was also driven by the approval of investment budgets while the private sector clearly continued its investment," MR Pridiyathorn said. 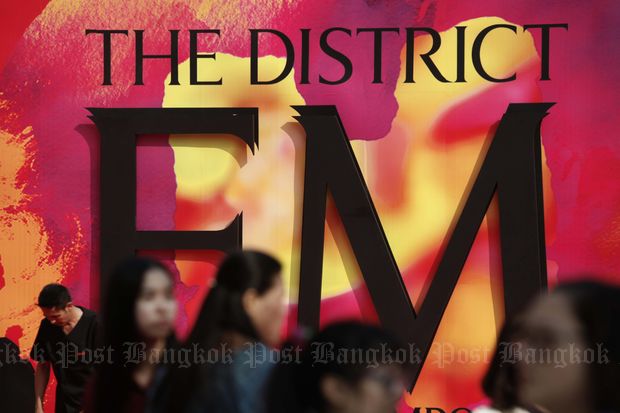 People shop at a new shopping centre in Bangkok late in March.