The first issue of the Prayut government's mini-newspaper, intended to make people more aware of its efforts and achievements, was published on Tuesday.

It has eight pages and is dated April 28, 2015. The first page runs a letter from Prime Minister Prayut Chan-o-cha, who explains that he took over administrative power to end the conflicts caused by the many different political opinions and the lack of discipline on the part of past governments that had led the nation to a standstill.

Gen Prayut said he wanted to see a Thailand with peace, prosperity, morality and justice. He also wanted unity among the people.

The government under his leadership would perform its duties honestly "with the heart of a soldier who wants to share sufferings and happiness with all people", he declared.

The centre spread features the Transport Ministry, outlining infrastructure development projects planned for the years 2015-2022 at a total investment of 1.9 trillion baht.

The last page is a summary of the work of the Interior Ministry's Damrongtham Centre, which accepts complaints on behalf of the government via hotline 1111 and other channels. 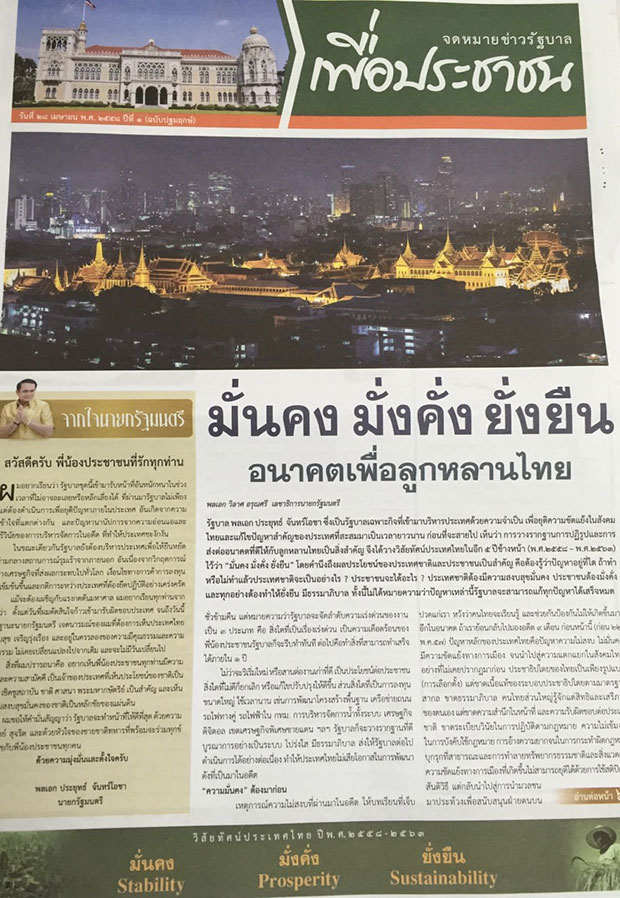 The first issue of the "Government Newsletter for the People" is launched on Tuesday. (Photo by Patsara Jikkham)

China's Wuhan to test 'all residents' as Covid returns

BEIJING: Authorities in Wuhan on Tuesday said they would test its entire population for Covid-19 after the central Chinese city where the coronavirus emerged reported its first local infections in more than a year.

TOKYO: A Belarusian Olympic athlete was sheltering in Poland's embassy in Tokyo on Tuesday after being offered safe passage to Warsaw, as the US slammed her team's attempt to send her home.