More camps built to detain and enslave Rohingya fleeing Myanmar are being discovered by the day in Songkhla province, as details come clear of a shocking racket of capture, sale and ransom, probably with the help of officials in the areas. (Photos by Pornprom Satrabhaya)

Prime Minister Prayut Chan-o-cha has given local authorities in all provinces 10 days to eliminate all Rohingya detention camps and related activities in their areas.

Authorities concerned would face punishment if illegal human-trafficking detention places and activities are still found after that time frame.

"Local authorities are required to report to the government via the Provincial Adminisration Department chief if they find any state official involved and cannot deal with the problem," said Maj Gen Sansern.

The move came after the discovery of dozens of graves and bodies, believed to be Rohingya people, at abandoned jungle camps in Padang Besar, Sadao district of Songkhla, and Phangnga.

Meanwhile, the army has transferred a regiment commander suspected to have links to Rohinga trafficking out of Songkhla and vowed to severely punish any soldiers found involved in the wrongdoing.

Deputy Prime Minister and Defence Minister Prawit Wongsuwon revealed Wednesday army chief Udomdej Sitabutr has ordered the transfer of a colonel who was a local regiment commander in the province. The name of the commander was not disclosed.

Gen Prawit said any soldiers suspected of being involved could face immediate transfers.

Also on Wednesday, deputy national police chief Chakthip Chaijinda said police were also investigating whether army officers were among the suspects and may seek an arrest warrant.

A source said police were searching for two soldiers who had abducted a trafficker of Rohingya migrants and held him for a two million baht ransom.

Pol Gen Chakthip said police were also looking for Supoj Muensew, a suspected gunman, who could lead to the mastermind behind the Rohingya death camps in Songkhla province.

Police believed Mr Supoj had killed two Rohingya people at an illegal detention camp discovered last year and that he could lead them to a key suspect in Satun and a human trafficking network behind the illegal smuggling of Rohingya migrants.

Pol Gen Chakthip said he would discuss the Rohingya issue with senior Malaysian police at a Thai-Malaysian police meeting in Phuket province next week. Malaysian police were working well with their Thai counterparts, and similar cooperation was being sought from police in Myanmar, the country of origin of the Rohingya migrants. Thailand was in the middle of the smuggling route, with Malaysia the destination, he said.

Pol Gen Chakthip said a centre will be set up in Songkhla's Hat Yai district to combat Rohingya trafficking. The centre will integrate the work of state agencies to quell human trafficking networks which use Ranong, Phangnga, Satun, Songkhla and the three southern border provinces of Yala, Pattani and Narathiwat as transit points for smuggling Rohingya people. The centre will also follow up on progress in cases involving suspects under arrest warrants, Pol Gen Chakthip said.

Army spokesman Winthai Suvaree said that on March 29 soldiers, acting on a tip-off about the movement of illegal Rohingya migrants, patrolled an area along the Thai-Malaysia border near Ban Taloh Moo 8 in Padang Besar.  (Story continues after the photo) 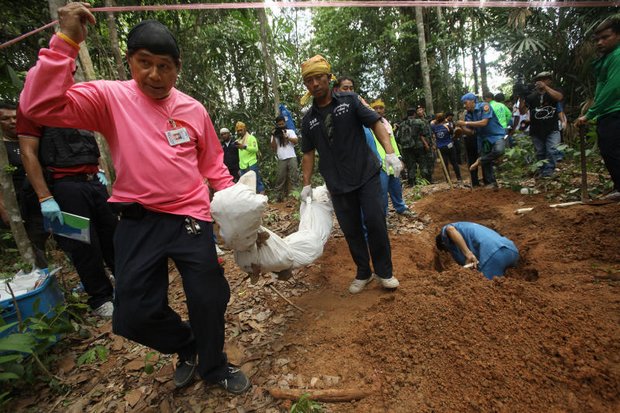 They found two Thai men identified as Boonyen Nesalae and Phin Ruambua, along with a group of Rohingya people there. The Thai men were taken to the unit's base for questioning to gather intelligence. The interrogation lasted about 12 hours and the two men were then freed.

But the following day, the men filed a complaint with police, accusing the soldiers of detaining them for ransom, Col Winthai said.

Since the statements by the villagers conflicted with those given by the soldiers, the unit the soldiers belong to will probe the matter again to ensure fairness to both sides, Col Winthai said.

He said any army personnel found to have been involved in wrongdoing will be severely punished.

The search for Rohingya bodies continued in Padang Besar in Songkhla's Sadao district.

Six more bodies were exhumed from an abandoned Muslim graveyard at Ban Taloh Moo 8 in Padang Besar, not far from the illegal migrant detention camp on Khao Kaew where the 26 bodies thought to be of Rohingya migrants were found. The six newly-found bodies — four females and two male — were sent to Songklanagarind Hospital to be identified.

The government on Monday announced its readiness to host the Asia-Pacific Economic Cooperation (Apec) Economic Leaders' Meeting and other related gatherings on Nov 18-19.

The Royal Thai Air Force (RTAF) will have to tighten its belt and maximise the utilisation of its existing resources, assistant air force chief ACM Alongkorn Vannarot said on Monday.