Anti-coup student activists and their supporters gather outside the Sam Yan market near Pathumwan police station. (Photos by Patipat Janthong)

Anti-coup students and supporters ended a 10-hour protest outside Pathumwan police station Wednesday night, the longest rally since the May 22. No arrests were made.

The group dispersed at about 9.30pm after their representatives were allowed to file a complaint with Pathumwan police in which they accused officers of breaching their human rights and of detaining them during their May 22 anti-coup rally outside the Bangkok Art and Cultural Centre.

Military and police told them they would not be arrested if they dispersed and returned home. However, arrest warrants for key student activists charged with violating the NCPO order on coup-anniversary demonstrations were still active.

The gathering, which began early in the afternoon, was initially led by eight Bangkok university students who were charged with defying the NCPO order for their rally on May 22.

The group was joined by seven university students from Loei province, known as the Dao Din group, who also faced the same charges.

The eight Bangkok students were due to report to Pathumwan police to acknowledge the charges against them. But they staged a rally near the police station instead, saying they did not come to hear the charges but to show that they did not flee from authorities and had done nothing wrong.

Jatupat Boonpattaraksa, 23, a Dao Don activist,  said his group would continue to protest against the coup-makers regardless of whether authorites arrest them.

Earlier report: The students camped out in front of the Sam Yan market near the Pathumwan police station, but did not go inside to formally recognise the charges stemming from their coup-anniversary demonstration at the Bangkok Art and Cultural Centre.

In a statement read by Rangsiman Rome, one of the activists, he said his group did not come to hear the charges but to show that they did not flee from authorities and had done nothing wrong, according to Matichon Online.

The students later authorised Kritsadarng Nootcharas to file a complaint with Pathumwan police on their behalf, accusing officers of taking legal action against them in breach of human rights, committing offences against their persons, and abuse of power.

Officers, however, refused to accept Mr Kritsadarng's petition and said the students were already there and should lodge the complaint themselves.

The group viewed the police's refusal as a way to provoke them and feared they'd be arrested if they entered the station. The activists pledged to petition the Crime Suppression Division and if police act slowly they would bring the matter to the Criminal Court.

The eight students were joined by seven university students from Loei province, known as the Dao Din group, who also face the same charges. They were arrested on May 22, the first anniversary of the military coup, during a protest at the Democracy Monument in Khon Kaen.

The students were still gathered near the police station at 4pm. 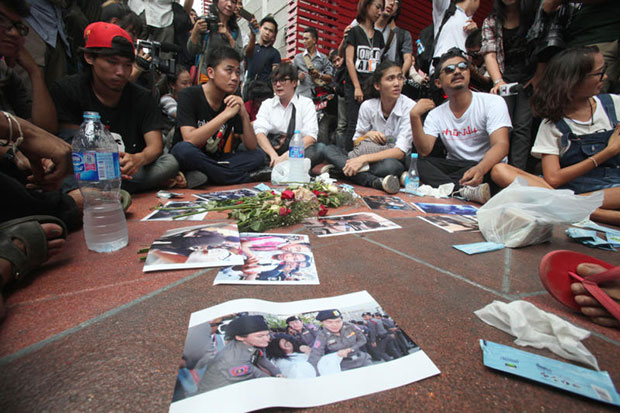 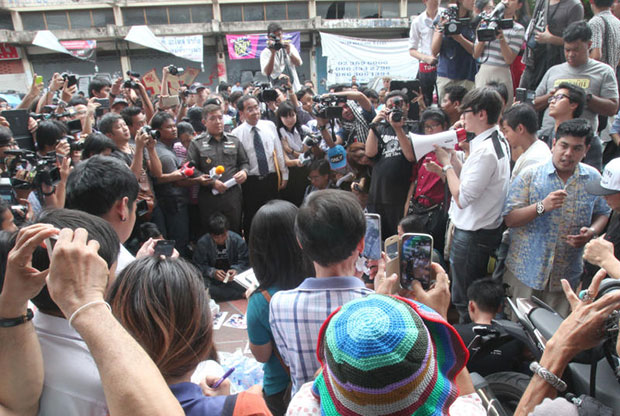