Mr Suthep gives the letter to Pol Maj Gen Vissanu Muangpraesee, deputy Police Region 8 commander, on July 28, 2015 in protest against the relocation of the office to Phuket. (Photo by Supapong Chaolan)

SURAT THANI — Suthep Thaugsuban has wasted little time after leaving the monkhood before launching his first move as a reform crusader.

The leader of a movement that triggered the downfall of Yingluck Shinawatra in 2014 entered a ceremony to leave the monkhood at 6am on Tuesday.

In the afternoon, he went to the Provincial Police Region 8 office to protest against the Aug 1 relocation of the command from Surat Thani's Phunphin district to Phuket.

Mr Suthep, a Phunphin native, led a team of 10 to the command to make his point.

Since commander Pol Lt Gen Decha Butnampetch was on an assignment, his deputy Pol Maj Gen Vissanu Muangpraesee accepted the letter on his behalf.

The letter expressed disagreement with the decision to move the command from Surat Thani, citing low-ranking officers would be affected. 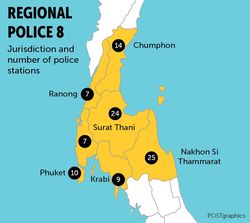 It also claimed if the command was relocated, communication and coordination among the police stations in Phuket, Phangnga and Krabi would be convenient, but at the expense of those in Chumphon, Nakhon Si Thammarat, Ranong and Surat Thani.

"Geographically, Surat Thani is the centre of police works in the region and people can easily get to it. I don't understand why high-ranking officers would want to relocate it.

"If it must be moved, they should at least allow their subordinates who don't want to move to the resort island to be transferred to other places," Mr Suthep said.

He added he had heard about the plan for quite a while but did not expect it to be implemented so soon.

"We want the region's commander to rethink the order. After all, it's his own order and not one from the National Police Office. He can easily scrap it. Almost 200 low-ranking officers will be in trouble as they have to move their entire families to live in Phuket," he said.

But scrapping the plan might not be easy since the new command had already been completed.

The 185-rai plot of the Treasury Department houses accommodation for officers, a strategy training centre, a club and sports fields. It costs 169 million baht to build.

In response to Mr Suthep's comments, police spokesman Pol Lt Gen Prawut Tavornsiri on Tuesday said the command had to be moved because of frequent floods at the existing office.

"The new office also has easy access to nearby provinces. It's also large and can better serve people," he said, adding the environment was also better at the new command.

Mr Suthep, a former deputy prime minister, resigned from the Democrat party to head the People's Democratic Reform Committee, a driving force that staged street protests that culminated in the May 22, 2014 coup.

He entered monkhood in mid-November 2014 during which he occasionally voiced support for the junta.

A few weeks earlier, he announced he would not return to politics after leaving the monkhood. Instead, he pledged to become a social activist by heading the PDRC Foundation.

"Today, I made the complaint in the name of Suthep Thaugsuban, a citizen who knows something about bureaucracy and wishes to use that knowledge to help others. From now on, I'll dedicate myself to serving the public and people, my first job after leaving the monkhood," he said.