Chris Smith (Republican party, New Jersey) was among several US congressmen from both parties who heavily criticised the 2015 Trafficking in Persons report for politicising the issue, and for being unfair towards Thailand. (Photo courtesy Mr Smith's office)

Prime Minister Prayut Chan-o-cha says he is confident Thailand's standing on human trafficking in the US Trafficking in Persons (TIP) report will improve next year, as international accusations flew that the rankings were influenced by politics and economic interests.

The TIP report, issued in the US on Monday, has come under increasing fire from US lawmakers and international human rights advocates after it upgraded Malaysia and Cuba from Tier 3, the lowest level, but kept Thailand at its present Tier 3 ranking.

Gen Prayut refrained from commenting on claims that the report was motivated by political rather than trafficking concerns alone.

Malaysia's upgrade from Tier 3 to Tier 2 comes at a time when it is involved in negotiations to join the Trans-Pacific Partnership, a key regional trade pact which the US hopes it will join.

Meanwhile, Cuba's upgrade coincides with its decision to normalise relations with the US.

In the US, one of the most stinging criticisms came from Republican congressman Chris Smith, the author of the Trafficking Victims Protection Act of 2000 (TVPA).

He called the upgrade for those countries "trafficking cronyism".

"If you want proof these decisions were politicised, just look at the numbers," Mr Smith said. "China convicted 35 traffickers, Malaysia three, and Thailand 151 — but only Thailand is on Tier 3.

"What message does that send? When we engage in trafficking cronyism, giving a free pass to new friends and partners for reasons unrelated to the suffering of trafficking victims, US credibility is harmed, US leadership is undermined and the trafficking victims are left helpless and alone."

Meanwhile, Gen Prayut advised the public not to worry.

"Please be calm. Do not worry. We are doing well and we are confident this can be solved," Gen Prayut said, adding Thailand remains determined to tackle human trafficking.

The government is dealing with the problem on many fronts — amending laws, changing the conduct of officials, punishing corrupt officials, registering foreign workers, verifying victims' nationalities and investigating employers for potential violations, according to Gen Prayut.

Regulating the fishing industry will also help Thailand meet international standards and conserve its marine resources for sustainable management, he said, adding that Thailand's ongoing efforts should lead to a better rating next year as the campaign gains momentum.

Commerce Minister Chatchai Sarikulya said the private sector sees the TIP assessment as a "double standard", because the Thai government has made the utmost effort to address the problem but was not rewarded.

Thai officials working to combat trafficking believe it is up to the international community to judge the value of the TIP report, a senior official said.

The official said work will continue against human trafficking regardless.

The government thought its ranking would likely remain unchanged because the cut-off date for the report was March this year and the crackdown ensued afterwards.

Government efforts to combat trafficking from April onwards can only be considered for the 2016 report, they said.

Speaking about the Thai effort on Tuesday, US embassy Charge d'affaires Patrick Murphy acknowledged changes made between 2014-2015, notably amendments to the law and improved cooperation between state agencies.

"But ultimately Thailand has not adequately met the standards required for an upgrade. Therefore, Thailand remains on Tier 3 in the ranking system of the TIP report," he said. 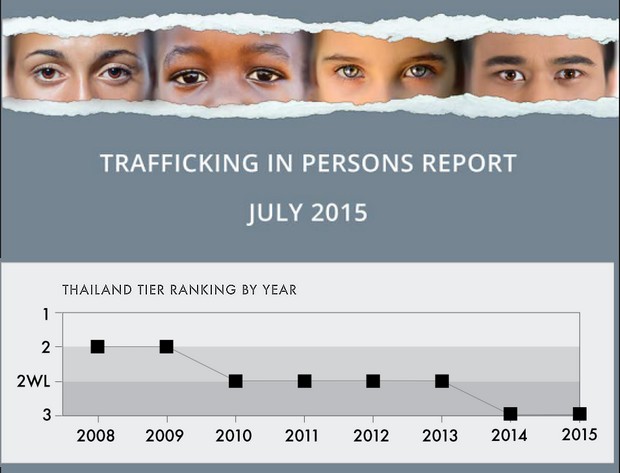 "It has nothing to do with politics in any particular country, it is about international standards," he said.

Deputy Foreign Minister Don Pramudwinai said Tuesday the US State Department will next hand the TIP report to the US president, who will decide within 90 days whether to impose sanctions on Tier 3 countries named in the report.

Sanctions could include a US vote to deny loans from the International Monetary Fund and other multilateral banks, and barring non-humanitarian, non-trade related foreign assistance, as well as certain education and cultural exchange programmes.

But Mr Don said Thailand probably would be spared from sanctions, because despite having remained at Tier 3 over the past year, the country's progress has not been affected by the TIP rating, he said.

Pornsil Patchrintanakul, vice-chairman of the Thai Chamber of Commerce, said the report is also unlikely to directly affect trade, as it does not talk about punishments such as trade sanctions.

Will the final Khmer Rouge ruling close a dark chapter?