The next general election could be delayed until April 2017 if the draft constitution is rejected by the National Reform Council (NRC), Deputy Prime Minister Wissanu Krea-ngam said Monday.

Mr Wissanu was responding to NRC member Wanchai Sornsiri's call for NRC members to vote against the draft charter and allow the country to undergo complete reform before a general election takes place.

He said Mr Wanchai has the right to express his opinion, but the government should stick to its time frame set for enacting the new charter and calling the general election.

The Constitution Drafting Committee is required to submit the final draft of the new constitution to the NRC by the end of the month and the council will then spend 15 days studying the document and vote on it next month. 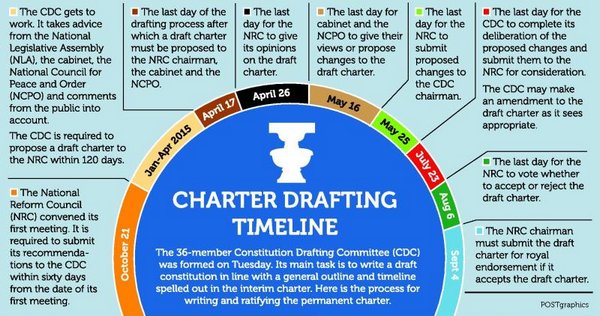 If the NRC approves the draft, a referendum, now made possible by the amended interim charter, is expected to be held in January next year for the public to decide whether to accept it.

If the public does accept it, another six months are required to draw up the new charter's organic laws, with a general election expected three months later or by around September next year.

But if the NRC votes against the draft charter next month, a new constitution drafting committee would be set up to draw up a new charter and would have six months to do so — by March next year.

If this were the case, a referendum would be held on the new charter four months later, or by July next year.

If this document passes a referendum, six months are required to draw up the constitution's organic laws.  An election would subsequently be held three months later, or in April 2017, said Mr Wissanu.

Asked to comment on the launch of the Muan Maha Prachachon for Reforms Foundation by former protest leader Suthep Thaugsuban, Mr Wissanu said he did not see it putting pressure on the government.

The foundation, which replaces the defunct People's Democratic Reform Committee, has repeated its demands that reforms take place before an election, but Mr Wissanu insisted the government was sticking to its roadmap.

Foundation secretary, Akanat Prompan, said the movement's reform push will not affect the government's roadmap or delay the election.

"We only ask that everyone does their homework within the given time frames," Mr Akanat said.

NRC member Paiboon Nititawan said several council members agree the referendum should include an additional question on whether the country should undergo reforms for two years before an election.

The amended interim charter allows the NRC and the National Legislative Assembly to propose one additional question each to be included in the referendum, on top of whether voters "accept" or "reject" the draft constitution.