The Criminal Court on Tuesday acquitted Democrat Thepthai Senpong of defamation in comparing former prime minister Thaksin Shinawatra to a ghost trying to return to its host body, nearly a decade ago. 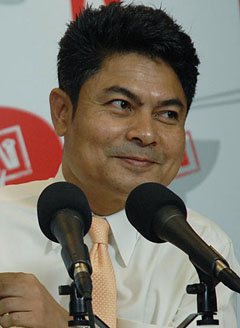 In 2006, Thaksin had his lawyer file a defamation suit against the Democrat Party and then-MP Thepthai.

The charge arose from comments Mr Thepthai made to the press from May 17 to 19, 2006 -- that Thaksin was like a ghost trying to return to its host body, or phi pob.

Thaksin, then prime minister, dissolved the House on Feb 24, 2006, just before a censure debate amid corruption allegations against his government. The subsequent general election was on April 2, with his then Thai Rak Thai Party hoping to return to government.

On May 8 that year the Constitutional Court nullified the election because it was called too soon and small political parties were hired to pretend to compete with Thai Rak Thai candidates, to ensure their victory, after the Democrats boycotted the polls.

The Criminal Court ruled that Mr Thepthai had only communicated political developments to the public at that time, and had not defamed Thaksin.