Borwornsak Uwanno, head of the Constitution Drafting Committee (CDC) attempts to explain the sudden appearance of a powerful "crisis committee" in the draft constitution, which critics say is nothing more than a smokescreen for future military coups. (Bangkok Post file photo)

Critics have slammed a Constitution Drafting Committee (CDC) proposal to set up a so-called crisis panel, saying it could open the way for "legitimate military coups" to take place in the future.

The CDC plans to launch a national committee on reform and reconciliation strategy, including the army, navy, air force and police chiefs. It wants to incorporate a clause allowing the panel to be given special powers to intervene in a political crisis.

CDC head Borwornsak Uwanno said this would empower the panel to intervene in any event before it led to violence, by taking over both executive and legislative powers from a government and parliament. He said that under the provisional clause of the new charter, members of the crisis committee could vote to decide whether it will intervene in a political crisis, when a government cannot function and national administration is seriously effected. Two-thirds of members must vote in favour of intervention for the committee to act.

Thaworn Senneam, a key figure of the now-dissolved People's Democratic Reform Committee, on Wednesday lambasted the proposed panel, and said the clause would only pave the way for legitimate coups to take place in the future. It will not help ease any crises, and the public's interests will still be ignored, he said. 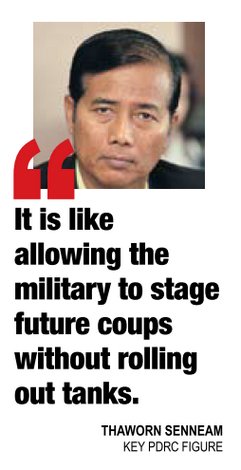 "It is wrong to include the military commanders and the police chief in the committee's make-up.  It is like allowing the military to stage future coups without rolling out tanks. The coups will be legitimate under the constitution," said the former Democrat Party deputy leader.

He said the crisis committee will have up to 22 members and one chairman, with members divided into two smaller sub-groups. The first sub-group of 11 members comprises the parliament president, the Senate speaker, the prime minister, the supreme commander, the army, navy, air force and national police chiefs, a former prime minister, a former parliament president and a former Supreme Court president. The remaining 11 members will be specialists from various fields selected by parliament.

Democrat Party leader Abhisit Vejjajiva said that while he understood the CDC's intentions behind such a committee, he had no idea how it would handle a political crisis. The CDC must elaborate on this, he said.

Nattawut Saikuar, a key figure of the United Front for Democracy Against Dictatorship, said the proposed panel was an attempt to prolong the coup-makers' stay in power for many more years.

He said the clause giving the panel special powers to handle a crisis was not acceptable, and that under the proposed make-up of the panel, elected government members would make up only a minority. If an opportunity arose, the panel could take away power from the executive branch, he said.

Sombat Thamrongthanyawong, who chairs the National Reform Council's (NRC) political reform panel, also criticised the proposal as "undemocratic". He said normal mechanisms should be used to handle a political crisis.

The executive and legislative branches, whose members are elected by the people, should be allowed to solve problems themselves, Mr Sombat said, adding it would be wrong to resort to "extra-constitutional means" to resolve a crisis, which would only lead to more conflict.

Seree Suwanpanont, chairman of the NRC committee on justice reform, said the panel proposal was fraught with problems. "Problems will arise if an elected government insists that it can handle a crisis that arises and refuses to cooperate with the crisis panel," he said.

Wanwichit Boonprong, a political scientist at Rangsit University, said the proposed committee would give too much power to civil servants. He suggested the panel should be made up of members of the judiciary rather than the military.

CDC member Jade Donavanik admitted that the scope of power of the crisis panel resembled that of the National Council for Peace and Order. It was a special approach aiming at involving all sides in solving a political crisis, he said.

Under normal circumstances, the panel will be responsible for pushing reform and unity. It will have a five-year term, and can extend its tenure for another five years. But it will only have the power to intervene in a crisis during its first five years in office, Mr Jade said.