The new economic team under Somkid Jatusripitak is not likely to make a dramatic change to the government's direction.

It is highly possible that the new line-up will continue to pursue the blueprint laid down by his predecessor MR Pridiyathorn Devakula.

But there will be some fine-tuning to bring about quicker and more fruitful action to revive economic fortunes -- an uphill task that the public expects the new faces to achieve. 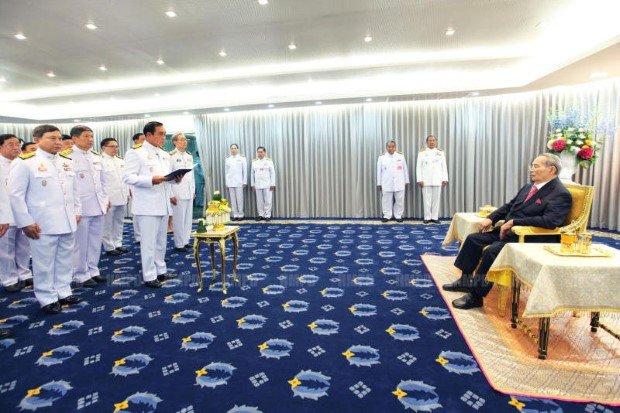 His Majesty the King swore in the new and reshuffled ministers, including Mr Somkid and his new economic team. (Photo courtesy Royal Household Bureau)

A populist policy could be forthcoming to resuscitate Thailand's stalled economic engine but most policies will be prudent, productive and selective by zeroing in on low-income earners.

Below, the Bangkok Post lists some urgent tasks and burning issues the ministries are required to tackle.

"There might be supportive cash to relieve the economic impact on those working in the informal sector, while a measure boosting those who earn fixed income could materialise," he said.

There could also be a measure aimed at enticing private investment via tax incentives, he said.

These measures might be regarded as populist but could be considered as addressing economic issues rather than striving for political gain, said Assoc Prof Somprawin, adding that feasibility studies and transparency in the disbursement process would contribute to the policies' credibility.

Former finance minister Sommai Phasee has urged his successor to push the land and buildings tax.

He also urged progress on the draft bill for fiscalising a 720-billion-baht debt -- moving it from some state enterprises' balance sheets to the government's -- as well as tax reform to stem loopholes used for tax avoidance.

URGENT TASKS: Gen Anantaporn will carry on the major policy of restructuring energy prices to make them fair for all consumers, especially by gradually floating the price of liquefied petroleum gas and natural compressed gas.

That appears to be following the wish of predecessor Narongchai Akrasanee, who said on his farewell day that he wanted the new minister to carry on this policy in order to make prices reflect real production costs and stop burdensome subsidies.

Gen Anantaporn is also expected to pursue the stalled 21st round of petroleum block bidding because of the country's urgent need for power, with its oil and gas blocks and proved reserves expected to be used up in only seven years.

Another burning issue is the development of a coal-fired power plant in Krabi that Mr Narongchai said should be done in the coming year to secure electricity supply.

"If the power plant project is scrapped, Thailand would have to develop a plant in a neighbouring country and import supplies," said Mr Narongchai. 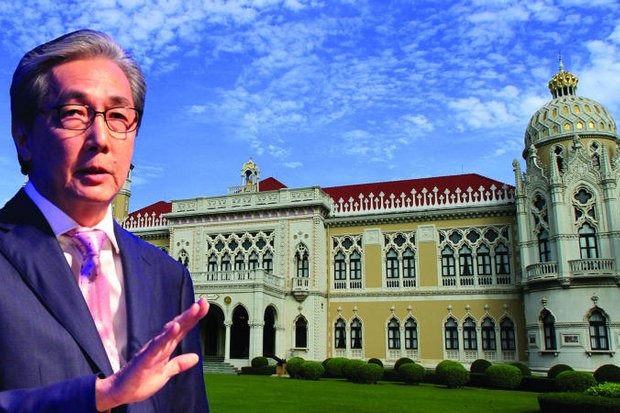 Meet the new economy czar Somkid Jatusripitak, whose new team at Government House are likely to be much like the old economy team - with some fine-tuning.

URGENT TASKS: Mrs Atchaka is expected to continue to facilitate investments as a means to stimulate the economy.

That includes a policy to boost new investments via the Board of Investment while cutting complicated paperwork for obtaining licences to encourage investors to start their businesses quicker and easier.

She should also continue the policy to support small and medium-sized enterprises by facilitating their expansion to support the economy.

Another task is to support industry and help Thailand to be a centre of the industrial supply chain in the region ahead of the Asean Economic Community (AEC).

URGENT TASKS:  Mrs Apiradi is committed to expediting state rice stock sales as fast as possible, whether they are old or newly harvested grains.

Boosting dismal exports with new strategic plans is also a must given the changing economic environment, global economic constraints and low oil prices.

She also vows to continue measures to take care of people's cost of living, move ahead with free trade area negotiations and work out preparatory measures for Thailand to cope with the arrival of the AEC.

Poj Aramwattananont, vice-chairman of the Thai Chamber of Commerce, said the new cabinet and the Commerce Ministry must take care of foreign exchange, as many countries have started a foreign exchange war to boost their own export.

Authorities need to ensure the baht's competitiveness to boost exports. Other urgent issues include accelerating attempts to address illegal, unreported and unregulated fishing.

URGENT TASKS: Speeding up significant infrastructure projects should be Mr Arkhom's top priority after several projects were delayed and failed to kick off as scheduled in fiscal 2015.

Those delayed projects include the construction of a railway link between the border province of Nong Khai to the industrial coastal region of Map Ta Phut in Rayong, a move that was advocated by experts but ignored by the Yingluck Shinawatra government.

Nopporn Thepsithar, chairman of Thai National Shippers' Council, said the transport minister needs to take special care of infrastructure investment, as the private sector is concerned that the government's high-speed train and double-track rail investment will not generate the best benefits for the country.

The government has to ensure that investment will also bring about technology transfer and parts production in Thailand.

URGENT TASKS: Though not a new face in the line-up, Mrs Kobkarn is most likely to pursue a major tourism policy carried over from MR Pridiyathorn Devakula's days.

She will need to continue to restore foreign tourist confidence, promote new destinations and attract more high-quality, with key selling points being Thainess and Thai culture.

The deadly bomb blast in Bangkok last week has made it a daunting task to restore travel sentiment among foreign tourists.

"If we can upgrade our country to become a high-end destination, we can generate more income," said Surapong Techaruvichit, president of the Thai Hotels Association.

URGENT TASKS: Speeding up business development of TOT Plc and CAT Telecom is among top priorities to pave the way for the development of telecom infrastructure.

The plan for sharing telecom infrastructure is also a critical task.

Mr Uttama admits he faces a tough and challenging job because the ministry is in a transitional period for restructuring and renaming as the Digital Economy and Society Ministry.