Smoke billows from the CentralWorld shopping centre at Ratchaprasong intersection in Bangkok in May 2010. Arsonists set fire to the shopping centre shortly after the surrender of red-shirt leaders. (Photo by Thiti Wannamontha)

Political turmoil could again raise its ugly head when the new constitution is promulgated and the next general election called, and that is why the nation needs the proposed "crisis committee", Deputy Prime Minister Wissanu Krea-ngam said on Monday.

There was a possibility conflict could occur on two occasions, the deputy prime minister said

One was during the referendum process on the new constitution in January 2016, and the other after the promulgation of the new charter and calling of a general election.

Conflict in the second case would be the most serious, he said.

Mr Wissanu said conflict over the charter referendum should be controllable, because it would involve only opponents to the constitution, which could just be dropped to end the problem. 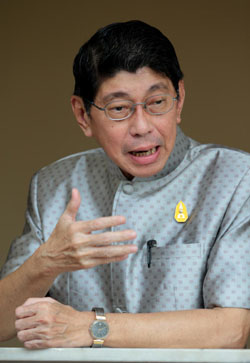 Conflict after the charter's promulgation and the next election was another matter, because there would be numerous sources of conflict -- protests against election results, independent organisations, the new constitution and the formation of the new government, Mr Wissanu said.

That was why the constitution drafters included a "strange" solution in the new charter, to discourage the use of any unacceptable means at that time, the deputy prime minister said. He was referring to the proposed National Strategic Reform and Reconciliation Committee, the so-called crisis committee.

Borwornsak Uwanno, chairman of the Constitution Drafting Committee, said on Monday that the purpose of the May 22, 2014 coup was to restore national peace, because political rivals had been protesting non-stop to oust each other from government since 2006. Without  the proposed five-year transitional period to achieve reform and reconciliation, political conflict would return, because politicians had not changed.

Any sign of renewed political conflict would have to be stopped right away, without a coup, and that was why the National Strategic Reform and Reconciliation Committee was needed -- to serve Thai society, he said.

The draft charter includes a clause to establish the crisis committee, which will be invested with special powers to intervene in a crisis by seizing powers from both the government and parliament if such action is deemed necessary. Its decisions and actions shall be deemed legitimate and final.

Such power is limited to five years after the charter is promulgated although the panel itself will continue to serve indefinitely if Parliament renews its term with a simple majority vote.

The panel would include a prime minister and the military and police chiefs, among others. Its special powers would last five years after the new charter is enacted.

During peacetime, the panel has the power to tell the government to do anything for the sake or reform and reconciliation. The government must comply with its requests if the panel confirms its decisions.

Details on its powers will be put in an organic law which has yet to be drafted.