Mock ballots are pasted on a statue in front of the Bangkok Art and Culture Centre in Bangkok in a protest against the constitution draft held by the Democracy Study group on Saturday. (Photo by Thanarak Khunton)

Security officers have surrounded Bangkok Art & Culture Centre in Bangkok after learning a group will hold a symbolic protest against the constitution draft on Saturday evening.

An order signed on Friday by Pol Col Jarut Sarutayaporn, chief of Pathumwan police station, was put in front of the centre, banning the use of the property as a demonstration site.

The order referred to an invitation of the Democracy Study group on its Facebook asking people to show their stand on the constitution draft at 4pm on Saturday at the centre.

It went on to quote Section 7 of the Public Assembly act, which was enacted last month.

It said Section 7 of the law prohibited a public gathering within 150 metres from a palace.

"The small yard in front of the centre or the skywalk across the Pathumwan intersection is within the radius of Sra Prathum Palace so no protest can be held," the order said.

The order also said the punishment for violation was six months in prison or a fine of not more than 10,000 baht, or both. The props and a measurement tape are shown at the Democracy Study Facebook. (Facebook/กลุ่มประชาธิปไตยศึกษา)

The Democracy Study group, however, appeared undeterred. It posted on its Facebook the meeting was still on at 4pm, showing a picture of its props and a measurement tape.

It explained since the police banned the gathering within 150 metres from the palace, the group intended to meet 151 metres from there, which is still the area near the BTS station and the National Stadium.

The activity involves kruad nam kwam khan, an act of pouring water and turning the containers upside down to show utmost disapproval of something that one doesn't want to see ever again.

It also urges people to mark a mock ballot showing their views on the charter draft.

Sirivich "New" Serithiwat, one of the leaders, said he hoped the activity would pressure the National Reform Council members who would vote on the draft on Sunday. 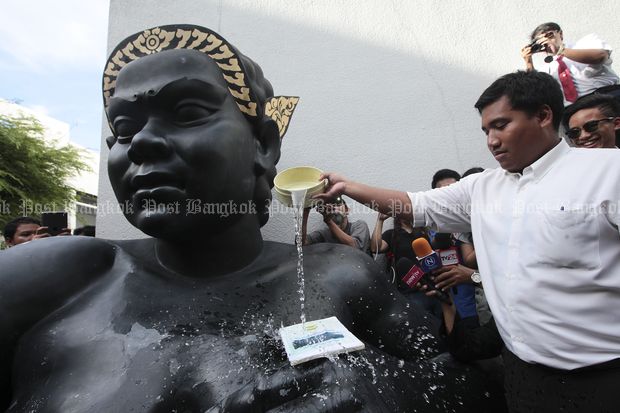