Former energy minister and Pheu Thai member Pichai Naripthaphan is being held for seven days at a military camp in Saraburi for his seventh “attitude adjustment”, according to a military source.

Three soldiers visited Mr Pichai’s home in the Pratunam area on Wednesday morning and invited him for a talk with officers attached to the National Council for Peace and Order's peacekeeping force at Army Region 1 on Ratchadamnoen Nok Avenue. 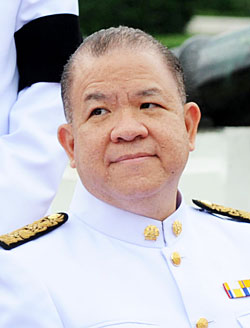 The soldiers were polite and made no physical contact with Mr Pichai who was subsequently allowed to drive his car behind the officers’ vehicle to the army base, local media reported.

Mr Pichai, who is on Pheu Thai’s economic team, said Wednesday’s invitation was his seventh session of attitude adjustment. He believed he was summoned for criticising the economic performance of the military government in a press interview.

He asserted that what he said was the truth and would discuss his views on solving economic problems with military officers during the talk.

No one has been able to contact Mr Pichai since noon. At 7.30pm, Daily News Online quoted an NCPO source as saying that the NCPO’s peacekeeping force would detain him for seven days for attitude adjustment because he continued to air opinions that were “not suitable for the current situation”.

The source said the former minister was likely to be held at an army base in Saraburi and would be released after the seven-day period.