Prime Minister Prayut Chan-o-cha says he is waiting for the next reliable government. (Photo by Thithi Wannamontha)

Prime Minister Prayut Chan-o-cha has urged people to vote for good politicians in the next general election and assured he would step down if there is an accountable government that will not repeat past mistakes.

In his weekly Returning Happiness to the Thai People programme on Friday night, Gen Prayut said that the rejection of the draft constitution by the National Reform Council on Sept 6 did not mean that he would prolong his power.

"Don't be afraid of me," he said. "I'm ready to relinquish everything if we have an accountable government, a government that will not make mistakes again."

With the constitution drafting process now back to square one, the date of the next election has been puched back to May or June 2017 at the earliest.

Some analysts say further delays could arise, especially if the next charter is rejected by a public referendum next year. That would give the military a pretext to stay in office even longer to pursue the sweeping reforms favoured by its supporters.

Gen Prayut, however, said his main concern was to protect people from being subjected to the same old political conflicts, to proceed with national reform and have a reliable government elected.

He raised the possibility of having politicians make a public promise to guarantee that they would not abuse power, bring people into conflict, or spend public funds in ways that would cause conflicts.

"These are problems and caused protests against previous administrations," he said. "When protests were prolonged, war weapons and bombs were used as you already know."

He was referring to anti-government protests in 2010, the protests that scrapped an Asean Summit in Pattaya in 2009 and other violent acts intended to discourage demonstrators. Such incidents must not be allowed to occur again, Gen Prayut said.

He also said that he wanted to see an end to negative comments from "wrongdoers who fled the country" — he did not name anyone — and were disseminating distorted information via online and foreign media.

Others could face a similar fate, Gen Prayut said earlier on Friday, before launching into another lengthy tirade against his critics.

"You cannot oppose me. No one will let you do that. I maintain that I have given you many chances already," he told reporters.

"Thai people who have said they love the nation should consider if these persons who support offences against the (royal) institution and violence instead of solving the problems should return to government," he said in his TV address.

"Everyone must think," he told his viewers. "You are in the position to determine the future of the nation and will face the consequences of the actions of the government that will be elected.

"If you have a government that lacks good governance, no one will solve problems for you again." 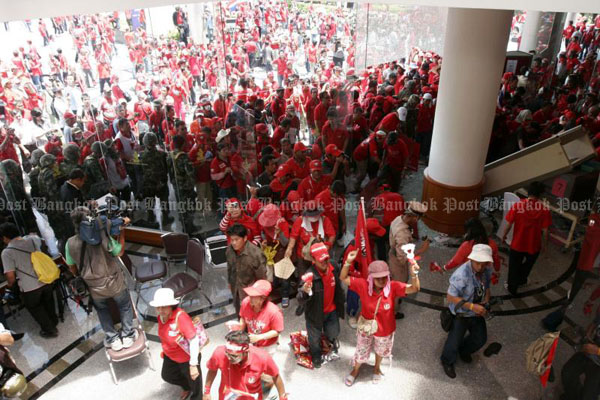 Red shirt protesters storm the Royal Cliff Resort in a bid to disrupt the Asean summit in Pattaya in 2009. The country cannot afford to risk a return to the political violence of the past, PM Prayut Chan-o-cha says. (Photo by Sarot Meksophawannakul)