<i>The Nation</i> senior reporter Pravit Rojanaphruk resigned from the English language newspaper on Wednesday after his second detention by the military junta as a result of his anti-coup stance.

“I have decided to resign from The Nation newspaper after a meeting with the management and being requested to quit in order to save the paper from enormous pressure from all sides in the aftermath of me being detained by the military junta,” Pravit wrote on his Facebook page. 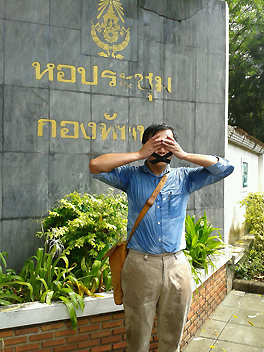 Pravit closes his eyes, ears and mouth as a symbol of censorship outside the Army Club in Thewes three days after the May 22, 2014 coup. (Photo by Achara Ashayagachat)

The 48-year-old reporter earlier told BBC Thai that he decided to resign to end the pressure the company and his colleagues were facing. He would work at The Nation until the end of this month, ending his 23 years there.

Pravit tweets and posts on Facebook regularly about freedom of expression and the need to lift the lese majeste law.

He was summoned and detained once for seven days shortly after the May 22, 2014 coup. He has since been summoned by soldiers several times but not detained. On Sunday, Pravit was asked to report to the Army Region 1 headquarters and was detained for an attitude-adjustment session before being released on Tuesday.

Nation TV news anchor Kanok Ratwongsakul wrote on his Facebook page on Tuesday, the day Pravit was released, that a large group of employees wanted the management to adjust their role in dealing with Pravit.

He was referring to a statement released on Monday by The Nation’s group editor-in-chief Thepchai Yong who called on the National Council for Peace and Order to immediately release the senior reporter.

“Mr Pravit has expressed his opinions on his private space, not in the role of media. Why did the company have to step in and protect him by claiming media freedom,” Kanok said.

Kanok claimed most employees disagreed and were displeased with Pravit. He ended his message with a hint that decisive action would be taken against Pravit.

PHITSANULOK: This year's launch of rafting in the Nam Khek, tentatively scheduled for Sept 27 in this central northern province, has been postponed indefinitely as the stream has burst its banks.

SONGKHLA: Ten Myanmar migrants were arrested on Sunday morning at a rubber plantation near the border with Malaysia in Sadao district while seven others escaped, police said.