Prime Minister Prayut Chan-o-cha made no mention of last year’s coup in a speech to world leaders gathered at the United Nations, instead highlighting his country’s commitment to sustainable development and protecting human rights.

"Thailand has always accorded priority to protecting and promoting human rights for all groups of people," Gen Prayut said Tuesday in his speech to the annual General Assembly in New York. "Thailand is undertaking comprehensive reforms on several fronts to make our country stronger and better in the hope that we will achieve security, prosperity, sustainability and pave the way toward resilient democracy."

The UN address and visit to the US were the first for Gen Prayut since he toppled the elected Yingluck Shinawatra government in May 2014. The military takeover and the sweeping crackdown on dissent that has followed has been condemned by Western governments as well as the UN, which has expressed alarm about the "chilling effects on freedom of expression" in the country.

Gen Prayut, who also heads the National Council for Peace and Order, is under increasing pressure as the economy slows, exports shrink and household debt rises. There is no firm date for a return to elections and civilian rule, with the previous timeline delayed earlier this month when the the draft constitution was rejected. Gen Prayut has pledged to hold polls in 2017.

Rights groups said the General Assembly was an opportunity for the international community to pressure Gen Prayut to loosen his grip on power and herald a swift return to elections. 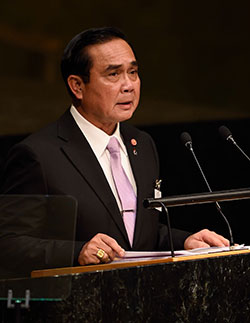 "Representatives of Thailand's junta have been allowed to strut around the international arena as if they are the legitimate representatives of their people," Asean Parliamentarians for Human Rights chairperson Charles Santiago, a member of parliament in Malaysia, said in a statement Monday. "A clear message must be sent to Prayut and his ilk that prolonged military rule will not be tolerated."

Gen Prayut has said he had no choice but to stage the coup in order to end more than a decade of sometimes deadly political unrest by rival factions and "return happiness" to a divided population. He has repeatedly called for patience as he and his appointed bodies map out and implement broad reforms across Thai society.

While Gen Prayut remains popular with many in Thailand -- particularly those opposed to former prime minister Thaksin Shinawatra -- whose allies have won every national vote since 2001 -- his legitimacy is regularly called into question on social media and in occasional demonstrations by those willing to defy a ban on protests and risk trial in military court and having their assets frozen.

The government's crackdown on dissent has led to a "shrinking democratic space" in Thailand, according to a UN statement released after Secretary-General Ban Ki-Moon met Gen Prayut on Sunday in New York. Mr Ban also emphasised the need for freedoms of speech and assembly to be upheld, the UN said.

Gen Prayut's trip abroad has given his opponents a rare opportunity to freely express their displeasure. About 100 Thais gathered in front of the UN headquarters on the weekend, some to protest Gen Prayut's presence at the meetings and others to show their support.

"We are inviting Thais to come out and exercise their rights in the Land of the Free," a group calling itself Red USA -- which appears to have links to Thaksin's red shirt supporters -- said in a posting on its Facebook page. "Do not wait for anyone else. It is us who will return our country to normalcy again."

Before he left on his trip, Gen Prayut said he wasn't concerned about protesters, though he said if they presented "distorted information" he would be "ashamed" for his countrymen.

"Why do they want to create trouble to other country," he told reporters in Bangkok last week. "There are lots of countries coming. Don't they feel ashamed? It's our country. If you want to argue with me, come to do it in the country. Don't do it in other place. That's shameful."