The new draft charter is likely to retain a clause for a so-called crisis panel that can overrule an elected government in the event of a political crisis, but may water it down, sources say.

The plan for the crisis panel, known as the National Strategic Reform Committee (NSRC) in the previous draft, ran into stiff opposition from politicians and critics of the coup who see it as a way to legally seize power in a political crisis.

Mr Meechai will call the first meeting of the new CDC at parliament Tuesday.

Speculation that the crisis panel will be retained follows the appointment of a new 21-member Constitution Drafting Committee (CDC) chaired by veteran charter writer Meechai Ruchupan, who has unveiled a five-point framework for drafting the charter. Two of the points say the charter must suit the Thai social context and put in place mechanisms that will effectively bring about reform and national unity. 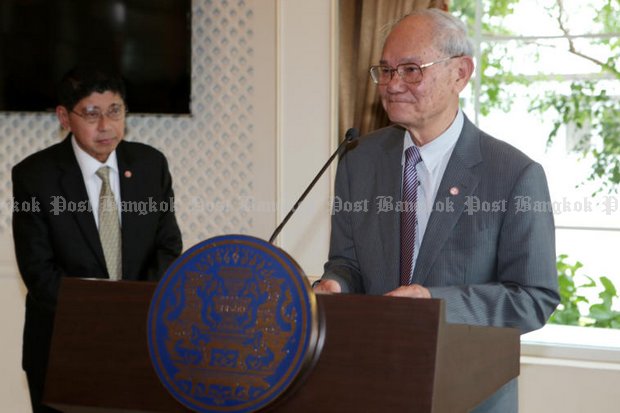 Political sources said the framework does not differ much from that adopted by the previous charter drafting committee headed by Borwornsak Uwanno, which came up with the crisis panel.

"Changes will be made to make the [crisis panel] more acceptable to the public. Politicians will have more say and can possibly veto a majority vote. The committee's decisions will need approval from an elected government," said a source.

Mr Meechai said he agreed to head the new CDC after talks with Prime Minister Prayut Chan-o-cha. "He insisted, and I didn't see why I should ask any further questions. I trust his judgement and, as a Thai, I should help as much as I can. I'm not in a position to decline or I will be seen as ungrateful to the country," he said.

He said he expected many difficulties due to other people's opinions, and addressed speculation over whether he would follow a military-designed blueprint. "Some people may wonder or guess that I won't be myself and will have to draft the charter as told [by others]. Let me say this. No one can draft the charter the way they want because the charter isn't for use at home. It is for the whole country."

He said the charter drafters would work under the framework of Section 35 of the interim charter, and the five-point rule which is in line with the National Council for Peace and Order's objectives. Section 35 requires the charter drafting committee to address 10 issues. They include the principle of Thailand as a single, indivisible kingdom; a democratic regime with the King as head of state; and efficient mechanisms to tackle corruption, ensure accountable spending of state funds, and prevent a populist administration of the country that could lead to long-term economic damage.

Mr Meechai said he would discuss retaining the crisis panel with other charter drafters. He said the committee faced the challenge of coming up with a draft that would move the country forward and was acceptable to all sides.

The CDC chairman said he was open to criticism and that a referendum on the charter was essential. "I am a person from an older generation, but with a modern mind. Being of an old or new generation is not important. The important thing is to keep an open mind. Some people claim to be democratic, but they will lash out at anyone who has different opinions. I am not that kind of person. I listen to what people say and think about it. If it's good, I'll take it. If it's not, I'll leave it."

Democrat leader Abhisit Vejjajiva on Monday welcomed the new CDC and the framework laid down by the panel chairman. He said it was a good sign the committee would focus on "how" to tackle corruption and populism, instead of "who" should control an elected government.

Muan Maha Prachachon for Reforms Foundation secretary Akanat Promphan, son of the wife of the foundation's icon Suthep Thaugsuban, said he was confident the Meechai panel would draft a charter to suit the Thai context. He stressed the foundation's call for the charter to put in place mechanisms to resolve a political crisis. Mr Akanat also welcomed the appointments of two former election commissioners as charter drafters -- Prapun Naigowit and Apichart Sukhagghanont, a former Election Commission chairman.

Peerasak Porjit, vice-chairman of the National Legislative Assembly (NLA), said the Meechai draft was unlikely to be much different from the previous one as the two panels worked under the same framework. He said the draft should ensure the crisis panel had a clear and limited time frame in which it could operate.

Deputy Prime Minister Wissanu Krea-ngam said Gen Prayut has stressed that the 6-4-6-4 model for charter writing must be strictly adhered to, or shortened if possible.

Other drafters include Juree Wichitwathakarn, of the National Institute for Development Administration; Chartchai Na Chiang Mai, a former NRC member; and Thitiphan Chuaboonchai, a former law faculty dean at Chulalongkorn University. Tienchai Na Nakorn, of Sukhothai Thammathirat Open University; Norachit Singhaseni, a former permanent secretary for foreign affairs; and Gen Niwat Sripen, former director-general of the Judge Advocate General's Department and a member of the NLA will also be on the panel.

Pakorn Nilprapan, a member of a committee of the Council of State; Patara Khampitak, a former president of the Thai Journalists Association; and Pummarat Thaksadipong, a former director of the National Intelligence Agency, are other drafters. Amorn Wanichwiwat, a former NRC member; Supot Khaimuk, a former Constitutional Court judge; and Udom Ratha-amarit, a former NRC member, are also on the committee. 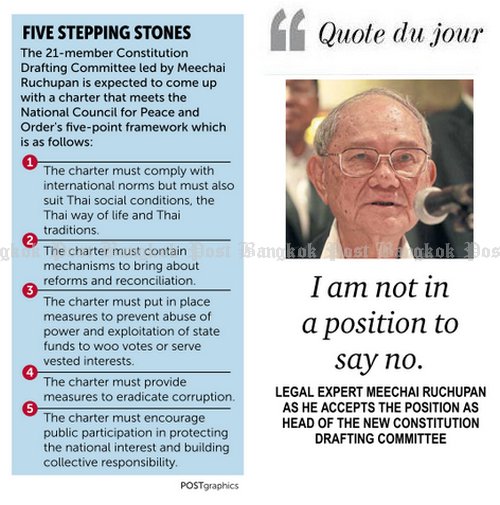