Public to get say on 'compilation' charter

PROTEST BLOOMS: New Democracy Movement activists place "dok mai chan" (paper flowers used in cremation rites) on top of mock bodies, in memory of victims of past political violence - the first protest against the new constitution writers and a demonstration against the coup in general. (Photos by Wichan Charoenkiatpakul)

Good elements from past constitutions will be collected to include in the new constitution and a first draft is expected in January which would then be presented to the public for feedback.

Speaking after the first meeting of the new 21-member Constitution Drafting Committee (CDC) Tuesday, CDC spokesman Amorn Wanichwiwat said the CDC agreed that some parts of the charter draft rejected by the previous CDC led by Borwornsak Uwanno should be adopted and revised for inclusion in the new draft charter.

Mr Amorn said the CDC held its first meeting on Tuesday, to discuss a time frame for the charter drafting, and that the CDC is expected to come up with the first draft in January so that it can be presented for public feedback.

The public's views will be then used to draw up the final draft to meet the 180-day deadline, or by April 1.

The two deputy CDC chairmen are former Constitutional Court judge Supoj Kaimuk, and former Election Commission chairman Apichart Sukhagganond, while two of the CDC secretaries are Pakorn Nilprapunt and Thanawat Sungthong, both of whom are members of the Council of State -- the government's legal advisory body.

Mr Apichart said the CDC would consider all past constitutions and compare them.

The best elements from each of them would be collected and considered for inclusion in the new charter.

Prime Minister Prayut Chan-o-cha said Mr Meechai briefed him that his panel would consider all past charters and those elements which are good and appropriate would be raised for discussion among the panel members.

Gen Prayut said he stressed the need for the new charter drafters to find ways to prevent future conflicts, reduce inequality and boost the people's role in national administration.

Meanwhile, Mr Meechai said the charter drafters will be racing against time to finish the new constitution by the April 1 deadline next year.

The CDC has a time frame of 180 days to complete its work.

But if Saturdays, Sundays and official holidays are not counted, the committee actually has only about 120 days to complete its task, Mr Meechai said

During the early stages the CDC will be meeting Monday to Friday, from morning until late at night, he said.

But in the later stages, the committee may have to work every day, including Saturdays and Sundays, he said. He felt that 120 days is not enough, but the CDC will try to meet the deadline.

Mr Meechai said it is too early to think about amending the 2014 interim constitution to extend the time frame. "Our target is to finish the job within the given time frame," he added.

The CDC must also be given time to revise the draft based on their suggestions, he said.

"So we need to finish the work quicker than the given time frame. I don't know if we will be able to do this, but we'll have to try," Mr Meechai said.

As for the process of gathering public input, Mr Meechai said he would have to consult CDC members about this matter.

He would initially propose at a CDC meeting that the committee should be open to all opinions and suggestions.

In his opinion, any individuals, groups or even political parties could do this through every channel without time limitations. But he did not know if the CDC would agree with him.

Mr Meechai also insisted that nobody had given him orders on how the new charter should turn out.

He said that everyone, including members of the media, could offer suggestions for the CDC to consider in a democratic manner.

NLA president Pornpetch Wichitcholchai said the NLA is ready to amend the interim charter to prepare for a referendum on the new charter if requested by the government.

He said the interim charter stipulates that the new charter needs approval from the majority of eligible voters to pass the referendum.

He also said the interim charter should be amended to find a solution in the event the new charter is rejected in the referendum.

Pheu Thai Party's former education minister Chaturon Chaisaeng said that while the new CDC is made up of several legal experts, its weakness is that none of its members have had experience in drawing up constitutions that uphold the principles of democracy.

Mr Chaturon said the five-point framework laid down by the National Council for Peace and Order as the basis for drafting the new charter fails to include some other important issues, particularly measures to prevent unelected bodies from dominating elected governments. 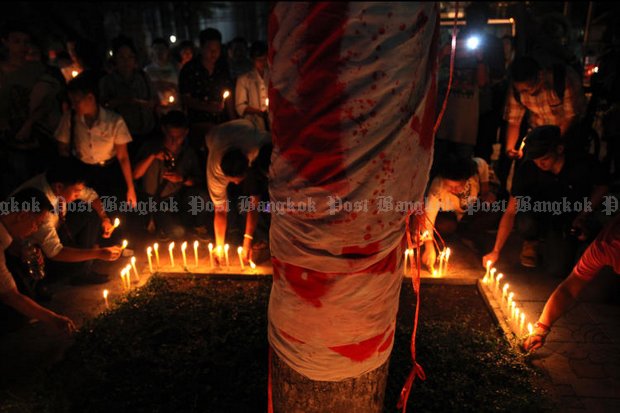 The anti-coup, anti-constitution protest, complete with mock blood, went into the night on Thursday, ostensibly to commemorate the Oct 6, 1976, massacre of student activists at Thammasat University.