The national police chief is denying that Pol Gen Prawut Thavornsiri was removed from his post as police spokesman because of lese majeste.

Speculation has been rife that arrest warrants will be issued for more lese majeste suspects, including senior police and military officers, after three were detained last week.

Pol Gen Prawut has been made a Royal Thai Police adviser.

He said he had no personal problems with Pol Gen Prawut, and the old team of police spokesmen under the command of Pol Gen Prawut had done nothing wrong.

"The previous police spokesmen worked hard for so long and deserve a rest from the job," Pol Gen Chakthip said.

"It's like playing a sport. When you're tired, you need to rest and substitutions are made," he added. 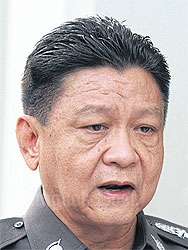 Prawut: ‘Not involved in any offences’

Pol Gen Chakthip dismissed rumours that the sudden change in the police spokesmen team was linked to the lese majeste arrests last week.

Pol Gen Prawut has been informed of the order appointing the new team while also insisting he was never involved in any lese majeste offences and that he is ready to face scrutiny when he returns on Sunday, the source said.

The three suspects were charged last week with violating Section 112 of the Criminal Code, for allegedly making false claims about the monarchy for personal gain.

Pol Maj Prakrom was found hanging inside his cell at a detention facility attached to the 11th Army Circle on Friday night.

Police sources earlier said a police raid on Mr Suriyan's room in Phahonyothin Park Condo in Soi Phahon Yothin 14 found his computer, from which he had tried to erase some data including correspondence with private companies for the "Bike For Mom" cycling event in August.

Mr Suriyan served as an adviser to a subcommittee responsible for holding the event. The sources said an investigation into Mr Suriyan's money trail found he had funnelled money to his relatives to buy assets for what police believed was money laundering.

The seized documents revealed he had cited the monarchy to collect millions of baht from private companies, including asking for more than 100 million baht from a large firm to buy bicycles from China for the "Bike for Dad" event scheduled for December. 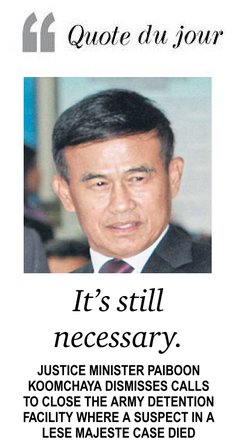 "To close the temporary prison, several agencies would have to be consulted," he said. The facility was established to confine Erawan bombing suspects.

Police have to seek the Justice Ministry's permission to use the facility, Gen Paiboon said.

Authorities carried out an autopsy overseen by prosecutors, police, administration officers and forensic doctors on Pol Maj Prakrom's body before issuing a death certificate citing asyphyxia caused by neck compression, according to the minister.

There was no need to send his body for a post-mortem at the Police General Hospital's Institute of Forensic Medicine, he said.