Suriyan "Mor Yong" Sucharitpolwong has become the second lese majeste suspect to die in military custody with the Corrections Department saying he died from a "blood infection".

Justice Minister Paiboon Koomchaya on Monday announced the death of Suriyan, who he claimed had died on Saturday.

The Corrections Department later issued a statement clarifying the circumstances surrounding his death, which came less than a month after the alleged suicide of another suspect, Pol Maj Prakrom Warunprapa.

Both men died while they were in custody at a temporary prison in the compound of the 11th Military Circle in Bangkok.

Suriyan was arrested along with his close aide Jirawong Watthanathewasilp and Pol Maj Prakrom and charged last month for allegedly extorting money from business operators by citing the monarchy. Pol Maj Prakrom, a computer-crime officer, reportedly committed suicide on Oct 23.

Suriyan, 52, a celebrity fortune-teller, was last seen on Oct 21 when he was brought before the Military Court for the first round of his detention.

He failed to show up when police sought a second detention on Oct 30 and a statement from the Corrections Department claimed he was suffering from a headache, abdominal pains, dizziness and slow reactions.

Meanwhile, Mr Jirawong will reportedly be taken to court on Thursday so authorities can apply for a third detention period.

Gen Paiboon said Monday that Suriyan was suffering from health problems and stress after his arrest. The suspect was taken to hospital once during his detention and medics were assigned to the prison. "Several suspects had health conditions when they were detained. We don't know which illnesses they suffered from. In this case he had a lot of stress," said the minister.

A source at the Corrections Department said relatives of Suriyan collected his body on Sunday and the cremation was held Monday.

According to a two-page statement released by the Corrections Department, Suriyan was found unconscious with a faint pulse about 9pm on Saturday by guards at the prison.

The suspect was examined by military medics and rushed to hospital, but by the time he reached the hospital, Suriyan had no pulse. He did not respond to advanced cardio pulmonary resuscitation (CPR) and was pronounced dead at the hospital.

An autopsy performed by the Institute of Forensic Medicine under the Police General Hospital on Sunday found Suriyan died from respiratory and blood circulation failure due to a blood infection.

The statement said Suriyan suffered from a high fever and bouts of coughing on Nov 5-6. He was prescribed medicine to alleviate the fever and cough before he was found unconscious on Saturday night.

Doctors said an airborne viral infection could be the cause of his acute illness, the statement said.

In a related development, the Military Court Monday approved a warrant for the arrest of Col Khachachart Boondee, an army officer attached to the 3rd Army, and Mr Jirawong for their reported connections to Suriyan's alleged criminal network.

Col Khachachart, Suriyan and Mr Jirawong are accused of lese majeste and soliciting money by making false claims in two cases. One involves a "past important event", reportedly the "Bike for Mom" event in August and "a forthcoming event", reportedly "Bike for Dad" on Dec 11.

Rise and fall of the fortune teller
Flamboyant fortune teller Suriyan Sucharitpolwong, who died on Saturday at the Department of Corrections General Hospital, at the age of 52 was a colourful figure characterised by fortune, mystique and mishaps. He died nine days before his 53rd birthday.

Suriyan, better known as "Mor Yong", was born Suriyan Ariyawongsopon in a family of 10 siblings in the southern province of Trang. 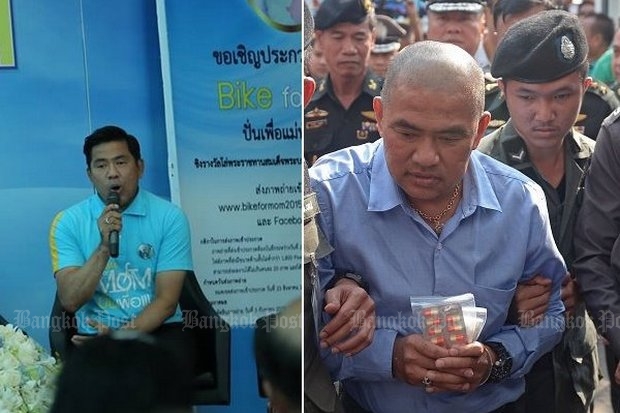 In August, a leader of the Bike for Mom event. In October, prisoner of the junta, which is how he died.

His hard work at his hometown school landed him a seat at Bangkok's elite Triam Udom Suksa pre-university school. He went on to complete a bachelor's degree in communication arts from Bangkok University and a master's in advertising design from Central St Martins University in London.

At age seven, according to his account on a local TV show, a tuk-tuk ran him over, knocking him unconscious for five days. While in a coma, he said he met a senior monk in a dream who gave him "special powers" that led to his ability to predict the future. Since then he has had tens of thousands of clients and followers through personal encounters as well as via telephone and online.

On his birthday in 2008, Suriyan was bestowed the new surname Sucharitpolwong by HRH Crown Prince Maha Vajiralongkorn, which means "clan that prospers with honesty". But his fortunes changed on Oct 16 this year, when he was arrested on charges of lese majeste and allegedly extorting money during the "Bike for Mom" event.

While in police custody at the 11th Military Circle in Bangkok, he was sent to hospital on Oct 22 for a brain scan after suffering complications related to pre-existing hypertension. His official death certificate said he died of respiratory and circulatory failure from a blood infection.