Protesters take aim at US envoy

Dozens of protesters gathered at the United States embassy on Friday to protest against US ambassador Glyn Davies' criticism of Thailand's lese majeste law. 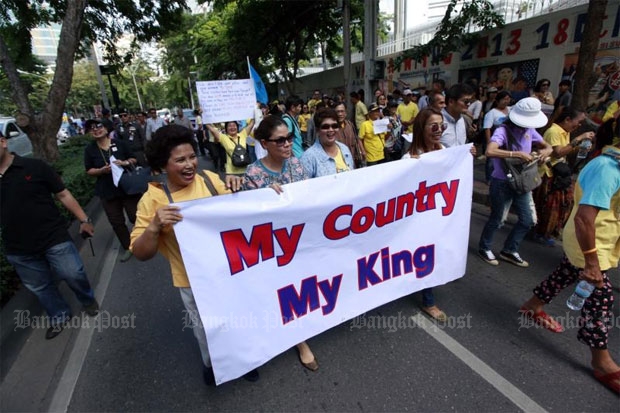 Protesters rally outside the US embassy in Bangkok on Friday. They also submitted an open letter to US ambassador Glyn Davies over his recent comments against the lese majeste law. (Photo by) Apichart Jinakul

Led by activist monk Buddha Isara, they urged Mr Davies, who took up his post just nine weeks ago, to understand Thai culture better and not to intervene in debates related to politics and the royal institution.

They called on the American ambassador to consider the longstanding close ties between both countries.

The protesters also raised banners with messages in Thai and English expressing their disapproval of Mr Davies' comments.

A few dozen police officers stood in front of the embassy as protesters held placards saying, "This is Thailand, not the USA" and "Go, go home", accusing the envoy of meddling in the country's domestic affairs.

"You have no right and no power ... we are not slaves of the US. The monarchy is a sacred symbol that all Thais are ready to defend with their lives," Phra Buddha Isara said.

The monk presented a letter to communicate the protesters' message to an embassy official. He said Mr Davies had strongly criticised the law that protected the monarchy, which was very disrespectful behaviour for an ambassador.

The punishments for offences against the royal institution were justified by the behaviour of wrongdoers, the abbot said.

On Wednesday, Mr Davies expressed concern about prison terms handed down under Section 112 of the Criminal Code, the lese majeste law.

No one should be jailed for peacefully expressing their opinion, he said during a talk at the Foreign Correspondents' Club of Thailand.

Under the lese majeste law, a conviction for insulting the King, Queen, heir or regent can up to 15 years in prison.

"That's his business, but the US has just sent representatives to discuss trade with me," Gen Prayut said.

"In the meeting with representatives from Britain and the European Union on Thursday, I asked them how I have done on improving trade and investment and they replied 'good'. So, I further asked whether a democratic government could do this, and they were speechless," Gen Prayut added.

Asked if he had explained to the other nations why Thailand needs to have the lese majeste law, Gen Prayut said he certainly did but those who do not understand would never try to understand.

Every other country has a defamation law, he said.

But the Thai monarchy cannot file a defamation suit against anyone who defames it and that is why the lese majeste law is needed to protect the royal institution, said Gen Prayut.

One has to distinguish between this specific law and the abuse of it by certain people, he said.