Prawit advises US ambassador to 'think before speaking'
Thailand
Politics

Prawit advises US ambassador to 'think before speaking'

US ambassador to Thailand Glyn T Davies gestures in a traditional greeting as he arrives before a news conference in Bangkok. (Photo by Pattanapong Hirunard)

He claimed the National Council for Peace and Order (NCPO), which seized power last year, provided more freedom than other juntas and was developing sustainable democracy in the country.

Gen Prawit was responding to Mr Davies' comments at a Foreign Correspondents Club of Thailand speech Nov 25 where he hit out at "the lengthy and unprecedented prison sentences handed down by Thai military courts against civilians" for breaching Section 112 of the Criminal Code, better known as the lese majeste law.

The comments were no major policy shift from Washington, but public criticism of the law is rare. And they sparked a demonstration in front of the US embassy in Bangkok on Friday in response.

Similar protests occurred in numerous provinces on Monday. The number of participants ranged from dozens to hundreds.

Demonstrators complained the US ambassador failed to mind his diplomatic manners by making remarks that could prompt people to defy the law that protected the monarchy from insult.

Some demonstrators demanded the government take diplomatic reprisals while others called for the US to replace its ambassador.

The same day, Prime Minister Prayut Chan-o-cha hinted that trade ties between the two nations could be affected if Mr Davies repeated such remarks.

"We hope the trade issue is looked at on its merits exclusive of politics and geopolitics," the ambassador said at a news conference on Monday. "If political leaders want to equate the two that's up to them, up to him."

Mr Davies insisted the United States has a "special attachment" to Thailand's king.

Following up the premier's comments, Gen Prawit asserted Monday that the government attached much importance to human rights and provided much freedom, including freedom of the press, and no other juntas had done the same.

The general's press freedom was made in the face after numerous incidents where the junta has summoned and detained journalists critical of its rule, threatened to close down publications and regularly lambasted reporters for asking probing questions.

Human rights groups and governments worldwide also have criticised the military regime for its curtailment of civil liberties and human rights.

"We are trying our best for the future of the nation and permanent democracy but it must take some times. We are building strong foundations for democracy in the future. We are not solving problems on a day-by-day basis," Gen Prawit said. 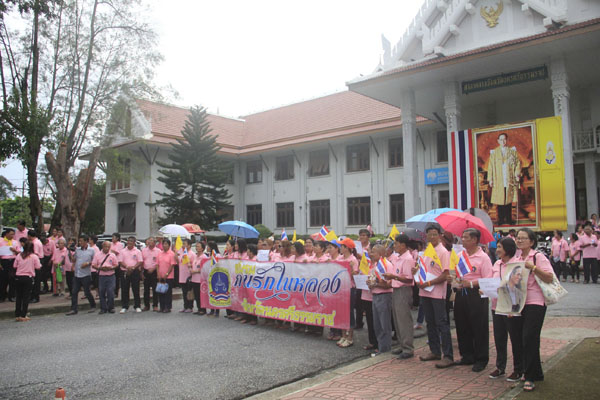 About 300 demonstrators gather at the provincial hall of Nakhon Si Thammarat on Monday to protest against the US ambassador. (Photo by Nujaree Raekrun) 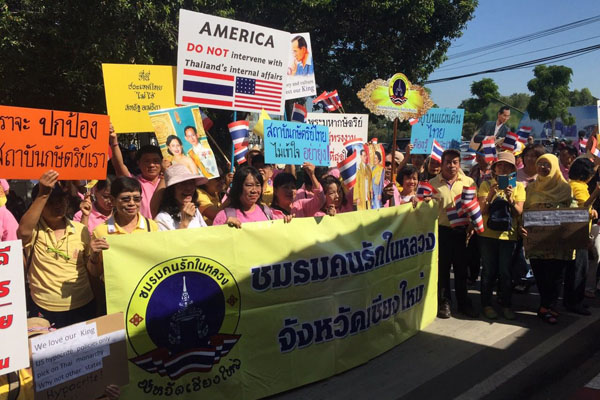 About 100 demonstrators show up at the US consulate-general in Chiang Mai province on Monday. (Photo by Cheewin Sattha)