US has not 'lost' Thailand to China, Davies says
Thailand
Politics

US has not 'lost' Thailand to China, Davies says

The United States has not lost Thailand to China, Washington's envoy to Bangkok said Monday, despite acrimony between the two allies and a palpable shift by the kingdom's junta towards its giant northern neighbour. 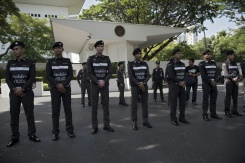 Police officers secure the entrance of the US embassy as supporters of Thai nationalist monk Buddha Issara hold a protest in Bangkok on November 27, 2015

"I don't spend a lot of time, I don't spend any time, saying to Washington here's how we get Thailand back. We haven't lost Thailand," ambassador Glyn T. Davies told reporters in Bangkok.

"I think it's a good thing for Thailand to have a good relationship with China," he added.

Thailand has been one of Washington's staunchest military allies in Southeast Asia and could have expected to see that relationship blossom under US President Barack Obama's "pivot" to Asia.

But the May 2014 coup, the second in the last decade, and the junta's subsequent rights crackdown has strained those ties.

Thailand's latest crop of military leaders have been embraced by Beijing, a warmth that has been reciprocated.

The junta has also begun forcibly deporting critics of Beijing back to China, some of whom had recognised refugee status, sparking condemnation from the United Nations and other western allies of the kingdom.

Davies has only been in the job nine weeks but has already ruffled feathers in a nation where ultra-royalist generals currently hold political sway.

On Friday an arch-royalist Thai monk led a protest outside the US embassy -- despite a current junta ban on political protests -- sparked by recent criticism Davies had made of the kingdom's controversial and draconian lese majeste law.