This crowd in Myawaddy on Sunday was one of several large demonstrations around Myanmar that continued on Monday to protest the convictions of two Myanmar men for the 2014 brutal murders of two British tourists at Koh Tao. (Photo by Assawin Pinitwong)

Deputy Prime Minister Prawit Wongsuwon believes the protests against the Koh Tao murder case ruling have been instigated by those who want to cause problems for the government.

"I want to know who instigated people to protest against the ruling, particularly those in Thailand," Gen Prawit said.

"A police investigation is under way and those involved must be dealt with."

He insisted those behind the protests intend to prevent the government from working smoothly.

His comment came amid demonstrations in Myanmar against Thursday's sentencing to death of Myanmar migrant workers Zaw Lin and Win Zaw Htun, both of them 22.

They were convicted of raping and murdering Hannah Witheridge, 23, and killing David Miller, 24, -- both British backpackers -- on the resort island in Surat Thani province on Sept 15, 2014. 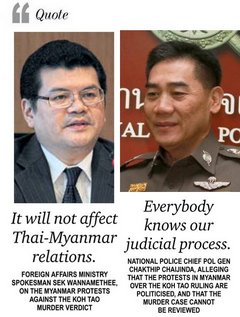 Myanmar's armed forces chief Gen Min Aung Hlaing also asked Thailand for a "review of the evidence" against the men, the state-run New Light of Myanmar newspaper reported on Sunday.

Responding to the call, Gen Prawit said Gen Min Aung Hlaing may have possibly disagreed with the ruling, adding if Myanmar authorities have some information which is different from the Thai police investigation, they can forward it to their Thai counterparts.

He said he would give the Myanmar armed forces chief the explanation that Thailand has a three-tier court system -- the first instance, appeal and supreme courts. Additionally, the convicts can still seek a royal pardon.

Supreme Commander Gen Sommai Kaotira has been assigned to explain the matter to his Myanmar counterpart, Gen Prawit said.

Gen Prawit said the case would be left to the normal judicial proceedures and there is no need for it to be reviewed.

Such a process can be ensured through the Appeal Court, he said.

The deputy premier insisted the case would not affect bilateral ties.

Responding to the protests outside the Thai embassy in Yangon, he said Myanmar authorities can handle the matter and there is nothing to be worried about.

Prime Minister Prayut Chan-o-cha, responding to the Myanmar demonstrations, said: "They [the two Myanmar workers] can still appeal, can't they? Isn't this the same legal practice all over the world?"

Meanwhile, national police chief Chakthip Chaijinda said Monday that police are on the lookout for the people who instigated the protests against the ruling.

"I have ordered all security-related agencies, particularly the Special Branch, to track down those who are behind the Myanmar demonstrations," said Pol Gen Chakthip, noting he did not yet know which group was involved.

The murder case has gone through judicial procedures and there are still the appeal and supreme courts to go, he said.

He said there have been a number of cases in which Myanmar nationals murdered Thai people in Thailand, but no similar protests had taken place before.

Foreign Minister Don Pramudwinai said the ministry has contacted Myanmar's Foreign Ministry to ensure the protests are under control because the rallies have spread to other places outside Yangon and the number of participants shows signs of increasing.

In some places, the rallies appeared to be set up, Mr Don noted.

Meanwhile, ministry officials said 72 Myanmar monks gathered at the Thai embassy in Colombo, Sri Lanka, on Monday to submit a petition calling for justice for the two Myanmar convicts. They dispersed peacefully afterwards. (Story continues below) 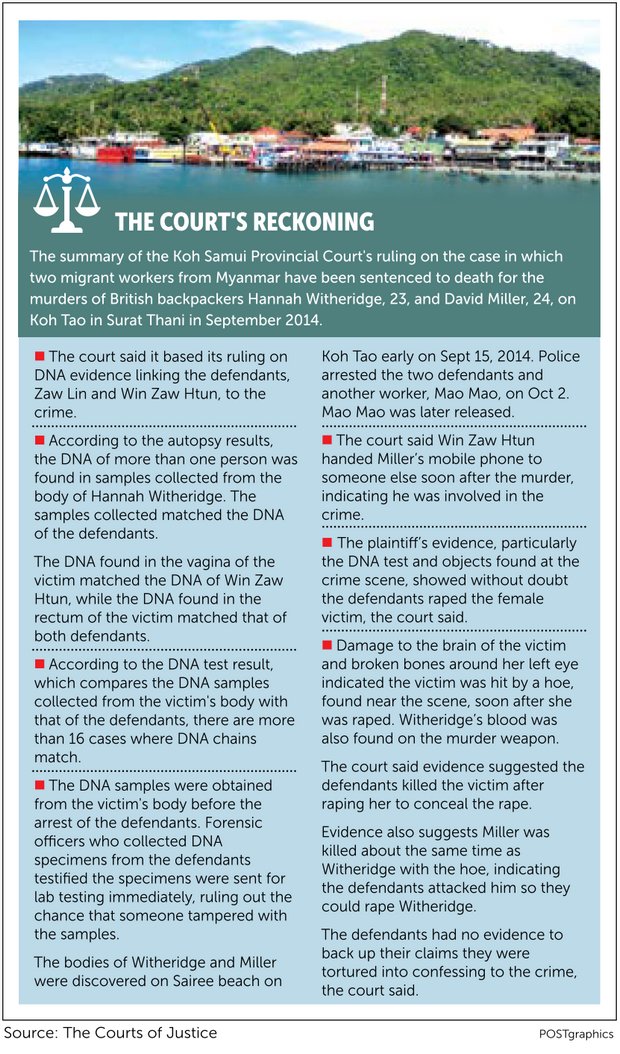 The demonstrators handed a petition to Thai authorities, calling for a re-investigation of the case and the release of the two Myanmar convicts.

Myanmar authorities closed the checkpoint to prevent Thais from entering the country, fearing for their safety.

Bertil Lintner, a Myanmar specialist based in Chiang Mai, said he did not believe the growing protests against the ruling were instigated by opponents of the Thai junta as suggested by Gen Prawit.

"The anger is genuine and comes after what many Burmese perceive as years of exploitation of Burmese migrant workers by Thai employers and harassment by the Thai police," said Mr Lintner.

However, he did acknowledge several interest groups in Myanmar are trying to take advantage of the situation to enhance their own popularity.

For instance, Ma Ba Tha, the nationalistic Buddhist Association, has issued a statement stressing they want to have good neighbourly relations with Thailand, but this case is a black mark on Bangkok's international reputation when it comes to human rights and democracy. 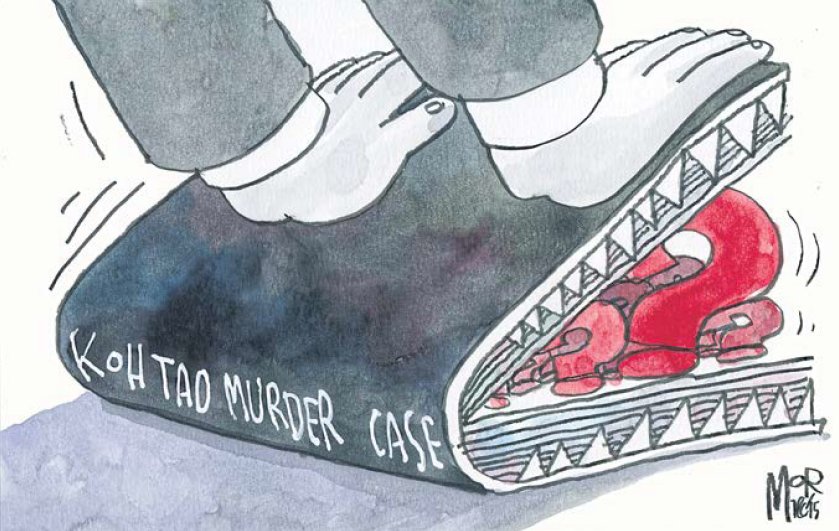 Trying and failing to close the book