Prime Minister Prayut Chan-o-cha has issued an order under Section 44 of the interim charter to temporarily revoke licences of drink drivers and detain them in a bid to curb fatalities during the New Year holidays.

His order was published in the Royal Gazette on Wednesday and took effect immediately. 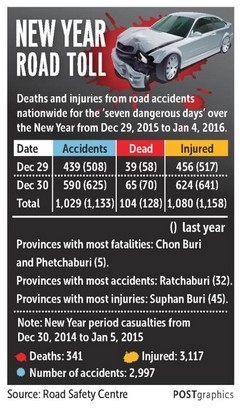 Under the order, people who assemble to race cars or motorcycles in public areas in breach of the law must be dealt with under land traffic and public transport regulations.

Motorbike drivers, public bus drivers and public van drivers who are found driving under the influence of alcohol beyond the legal limit and who cause injuries or the death of other people will also be punished, according to the order.

The order gives authorities the power to seize licences of drink drivers who violate the law for a maximum of 30 days and also impound their vehicles for a minimum of seven days.

The order also allows authorities to arrest and detain drink drivers and make them attend a behavioral adjustment programme for a maximum of 15 days.

Detained drivers will be sent to police investigators who will then charge and take legal action against them, the announcement says.

The order is a New Year present from Gen Prayut to the people, he said.

Meanwhile, NCPO deputy spokeswoman Sirichan Nga-thong said motorcycles were involved in 3,055 road accidents and that 334 motorbikes had been impounded between last Friday and Wednesday under a road safety campaign organised by military officers.

A total of 612 vehicles including motorcycles and cars belonging to drink drivers were impounded within the same period under a road safety campaign organised by military officers, she said.

Officials are stationed at spots on main roads nationwide to facilitate orderly traffic and ensure travellers get to their destinations with ease, she said, adding harsh measures will be taken against drivers who violate the law.

Public Health Minister Piyasakol Sakolsatayadorn said drink driving was the most common cause of road accidents in past years.

He was speaking as he visited health officials providing medical services to road victims at a local hospital in Ayutthaya.

Dr Piyasakol said he had ordered doctors and health personnel to be put on standby around the clock at state-run hospitals to help reduce the number of fatalities.

KHON KAEN - The most horrendous crash killed one passenger and injured 28 others after the driver of an inter-provincial bus bent down to pick up his dropped mobile phone in the footwell and lost control of his vehicle.

The officer said a preliminary inquiry found Mr Yutthana dropped his phone near his feet and leaned over to retrieve it and the bus travelled down a slope.

While doing so, the bus veered off the road and plunged into a road median and overturned.

The dead passenger, identified as Pairach Chairat, 30 of Udon Thani, was found crushed underneath the wrekage. Rescue workers and paramedics pulled out Mr Pairach and other injured passengers stuck inside and sent them to various local hospitals. The bus driver sustained minor injuries.

The bus left Si Sa Ket and was heading to northeastern province of Nong Khai when the accident took place, Pol Capt Pornchai. 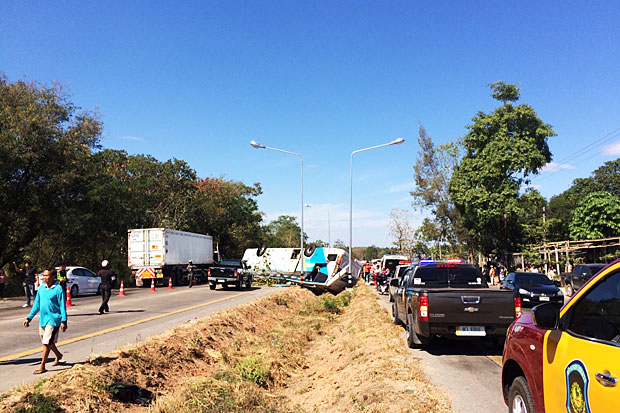 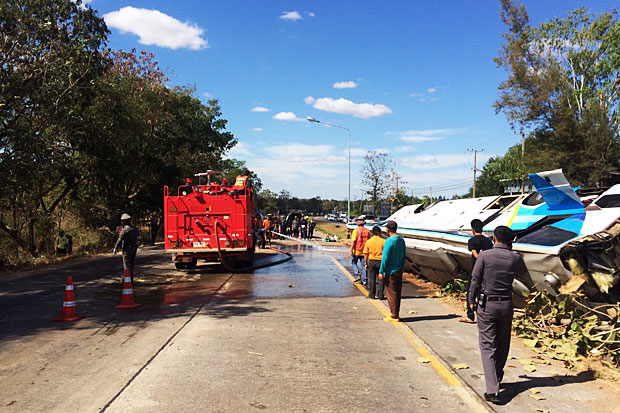 One of six foreign men accused of the extortion of 1.8 million baht in cryptocurrency from a Russian realtor couple on Koh Samui has been arrested in Chon Buri province and returned to the island.