Prime Minister Prayut Chan-o-cha answers questions from reporters about the Pheu Thai calendar after a cabinet meeting on Tuesday. (Photo by Thanarak Khunton)

Prime Minister Prayut Chan-o-cha shrugged off a call by the Pheu Thai Party to void bans on the Thaksin-Yingluck calendar on Tuesday, as two red-shirt members in Khon Kaen were called in for attitude adjustment after distributing it in public.

Gen Prayut said he would not issue a reply to an open letter from acting Pheu Thai leader Viroj Pao-in asking him to void bans on the calendar's distribution ordered by some provincial governors.

The calendar was inappropriate as one of the images was "a person who broke the law", the prime minister said and denied Pheu Thai's accusation the bans were politically motivated.

"Why should I answer him?" he said in response to  questions after a cabinet meeting. "Just use your judgement and think whether it is appropriate or not, because there is a lawbreaker pictured on the calendar," but he did not name anyone.

Thaksin Shinawatra was posed alongside his sister Yingluck in the two versions of the calendar. Thaksin jumped bail in 2008 before the Supreme Court's Criminal Division for Holders of Political Positions  sentenced him in absentia to two years behind bars for abuse of authority in his then-wife's purchase of Ratchadaphisek land from the state while he was prime minister.

The controversial 2016 calendar was printed for Pheu Thai members and former MPs to hand out to their friends and supporters over the New Year. 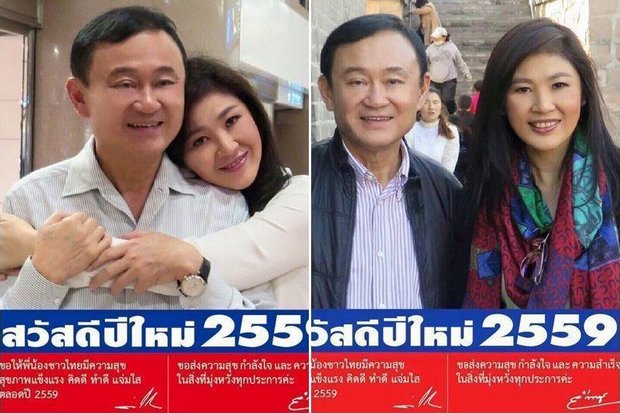 Pol Lt Gen Viroj  issued the open letter to the prime minister after the calendar was banned by the governors of Roi Et and some other provinces, although not by the government itself.

Police and soldiers in Khon Kaen also banned distribution of the calendar on Monday, when Ms Yingluck visited the province for a merit-making ceremony and to meet her supporters. But some copies were still handed out despite the authorities' close watch on her movements.

The 23rd Military Circle in Khon Kaen ordered Piyachai Nachai and Orathai Phosri to report for attitude adjustment after finding the two members of the United Front for Democracy against Dictatorship handing out the calendar during the former prime minister's visit to Khon Kaen. They were lectured for about an hour then released.

Mrs Piyachai, who gave about 20 copies to her friends and neighbours, said afterwards she would cooperate with authorities and stop handing out the calendar, but she still regarded it simply as a New Year's gift.

Col Somchai Khanpachai, the deputy commander of the Khon Kaen-based military circle, said the distribution of the calendar in public was deemed a politically motivated act, which violated an order of the National Council for Peace and Order that prohibits political activity.