Purge tied to 'conflict of interest'

Thai Health Promotion Foundation and the NGOs and foundations it has funded have won dozens of awards, often for innovative public-service advertising such as a series on smoking featuring children. (Video grab from YouTube)

The purge of seven board members of the Thai Health Promotion Foundation (ThaiHealth) was prompted by an alleged conflict of interest, a government source says.

The source said the conflict would provide an opportunity for the government to change rules governing the agency's spending so it can use the money to fund the regime's projects.

ThaiHealth's funds currently amount to more than 5 billion baht, up 1.5 billion baht from when the agency first came into existence about 15 years ago. Its budget is drawn from special charges on top of tobacco and alcohol taxes going into government coffers.

A source at the Centre for National Anti-Corruption (CNAC) said the ouster was recommended by CNAC because the board members serve in foundations that receive funds from ThaiHealth.

According to the source, the practice is not unlawful and is allowed by the law governing ThaiHealth's operations. However, such flexibility which was originally designed to facilitate ThaiHealth when it was set up was later exploited with money being channelled to subsidise "non-health" projects.

"The military government has also initiated several projects and it needs to divert funds from these organisations to finance its pet schemes," said the source. 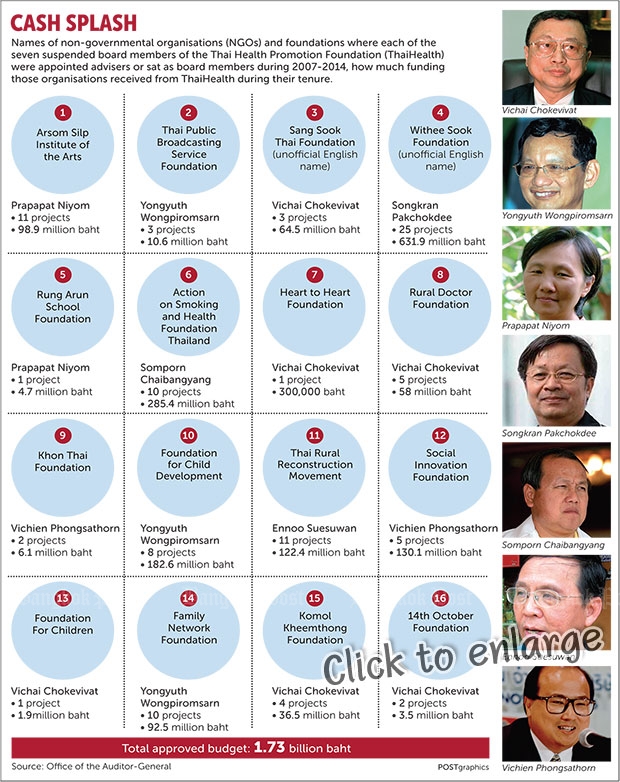 The spending regulations are expected to be amended after the appointment of new board members to divert funds to support government projects, said the source.

Auditor-General Pisit Leelavachiropas said the agency's probe outcome is inconsistent with the result of the National Council for Peace and Order's (NCPO) panel which investigated suspicious spending of state funds.

"It isn't corruption, but it's about conflict of interest. Some of the board members run several foundations which receive varying amounts of funds from ThaiHealth.

"They tabled the fund requests for board consideration and abstained from voting by leaving the meeting room. But the funds were usually approved," he said.

Mr Pisit insisted the practice is not against the law because ThaiHealth law allows non-profit foundations to seek funds. But it raises the question of whether it is appropriate and ethical.

"We are talking about reforms, so it's time to review and make proper changes to deal with the problem of conflicts of interest. Removing the board members through the use of Section 44 is a start," he said.

According to government sources, ThaiHealth approved a budget to support the construction of a small hotel which belongs to several board members.

After suspending the seven board members, the NCPO is expected to appoint a new board soon. The new board will change ThaiHealth regulations concerning budget spending.

The new regulations may allow ThaiHealth to use funds to finance projects to promote public wellbeing, including the controversial promenade along the Chao Phraya River, according to the sources.

On Thursday, Vichai Chokevivat, who is the ousted deputy board chairman, strongly dismissed as untrue the conflicts of interest claim, citing Section 18 of the ThaiHealth law.

A conflict of interest happens if board members are from private companies that receive funds from ThaiHealth. If they are from charity organisations or foundations which do public work, it does not fall into this category.

He said ThaiHealth approached executives of these foundations to serve on the board as part of strategic partnerships when it started out. It would not be fair to prohibit them from applying for funds and it was ThaiHealth who would lose out if these people did not join.

He also said when the board met to consider funding requests, board members with vested interests would excuse themselves from the meeting room and not vote, which was standard practice.

Dr Vichai reiterated that the purge was part of the campaign to bring down ThaiHealth.

He said the charter writing panel headed by Borwornsak Uwanno attempted to take away the earmarked taxes from ThaiHealth last year and force the agency to obtain funds from the fiscal budget in the future.

He accused tobacco companies of lobbying Charter Drafting Committee (CDC) members to do this.

The CDC, however, backed down on its proposal following fierce opposition from health groups, but the Office of the Auditor-General and the military regime's panel investigating suspicious spending of state funds stepped in after that.

Some board members were accused of having conflicts of interest in projects they approved and ThaiHealth manager Krissada Ruang-areerat resigned to make way for an inquiry at that time.

The fund misuse accusation was cleared up but it has been used again as the basis for the removal of the board members, Dr Vichai said.

Somporn Chaibangyang, a former board member, lodged a petition Thursday with the government for fair treatment, saying he had never abused his position to benefit foundations he served.

He said he had no information about an alleged campaign to bring down ThaiHealth.

Also Thursday, the ThaiHealth Promotion Movement issued a statement condemning the order to suspend the board members and said it would meet on Monday to discuss action to be taken if the new board members and the manager are nominees of the industries.

Meanwhile, Dr Prachumporn Booncharoen, adviser to the Thai Federation of General and Central Hospital Doctors, called on Dr Vichai to produce evidence to back his claims about a campaign to bring down ThaiHealth.

"There seems to be an attempt to turn individual cases into one targeting an organisation. If the organisation is at stake, people will rush to help. There will be allies. ThaiHealth should be glad that it is being investigated," she said.

Yingcheep Atchanont, an activist from iLaw, said ThaiHealth had lost touch with the civic sector for some time and it has resorted to a top-down approach, similar to the bureaucratic system.

He also criticised the foundation's policy, saying it had not developed much from the themes of drinking less alcohol and teaching good morals.

However, he denounced the use of Section 44 to remove the seven board members and called on allies of ThaiHealth to start questioning the military government's use of its power to purge others.

"ThaiHealth has become a 'godfather' in Thai society," he said. "Like the military regime, it has taken total control by citing the public good," he said.