Rubber farmers in the South are threatening to stage a major rally and a hunger strike if their demands for government action to shore up falling prices are not met.

Saksarit Sriprasart, a leader of rubber farmers in Trang, said a network of small planters in the southern province would start a hunger strike in front of the provincial hall Tuesday until their demands are met.

"When the hunger strike will end depends on the government's policy.

"The hunger strike will continue until we achieve victory," he said.

Prathop Suksanan, president of the Southern Rubber Planters Network, said its members will hold a forum at the Rubber Authority of Thailand's Trang Office Tuesday to prepare their demands for government assistance.

Mr Prathop said the group has four demands for consideration at the meeting. 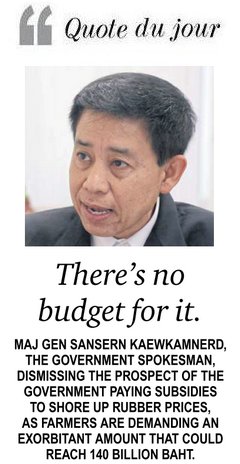 Firstly, it wants the Rubber Authority of Thailand to reveal the details of a contract to sell 200,000 tonnes of rubber products to the Chinese company, Sino Camp Iko.

It also wants to ask the government to speed up appointments for the new board of the Rubber Authority of Thailand as two candidates it has proposed have not been appointed.

The group also wants the government to accelerate compensation payments to rubber growers suffering from tumbling prices. Only 2,000 farmers have received the money.

Last November, the government approved spending of 12 billion baht, or 1,500 baht per rai for a maximum of 15 rai per farmer, to help them with production costs.

The group also wants Prime Minister Prayut Chan-o-cha or the agriculture minister to meet rubber farmers and listen to their demands instead of sending representatives to receive their complaints.

The government has earlier ruled out stepping in with subsidies to shore up rubber prices, saying the cost would be exorbitant.

Mr Prathop said the network hopes the meeting to discuss the rubber price slump Tuesday will be the last and the government will accept their demands and take action to address the problem.

If the government ignores their demands, the network will discuss the possibility of raising the pressure to a higher level, he said.

Government spokesman Sansern Kaewkamnerd Sunday said representatives of all stakeholders -- planters, buyers and government officials -- came to a conclusion on how to address the problem at a meeting last Thursday.

The meeting agreed the agencies involved will buy rubber products at prices that are not lower than current prices, Maj Gen Sansern said.

Maj Gen Sansern said Gen Prayut has ordered eight ministries -- Transport, Interior, Education, Public Health, Defence, Industry, Commerce and Agriculture -- to use their own budgets to buy rubber to boost domestic use of the product.

Maj Gen Sansern said the government is trying as hard as it can to help farmers who suffer from low prices, and applying more pressure will not solve the problem.

In Nakhon Si Thammarat's Thung Song district, a meeting between a government representative and rubber growers failed to produce results.

Chintana Chaiyawannakan, assistant to the agriculture and cooperatives minister, met representatives of rubber farmer protesters to gather proposals from them.

More than 100 farmers rallied in front of the provincial hall to demand the government step in to solve the price slump.

After a two-hour negotiation, Ms Chintana accepted only one proposal which calls on the government to cut red tape to allow farmers to gain access to the 1,500 baht plantation subsidy more quickly.

In Surat Thani, the Association of Rubber Growers in 16 Southern Provinces met Sunday to discuss solutions to fix the low prices.

Association president Sunthorn Rakrong listed the group's demands. The group called for a rubber price subsidy of 60 baht a kilogramme. If this demand is not met, the group will hold a major rally to push for their cause, he said.