Gen Prayut also said the government is close to finalising a scheme to help rubber farmers before the new harvest season starts in three months. The government plans to buy rubber at a slightly above-market price for a production project.

"If we don't do anything with the old system, we'll keep running into this problem," he said. "We're initiating a process where the government will purchase rubber at a slightly above-market price.

"I don't know if it will make them happy. The government is buying for production of certain products. The rubber won't be sold. It will go to small- and medium-sized enterprises that will manufacture rubber products."Gen Prayut said the prices are expected to be concluded this week. He said the government will continue to promote the wider use of rubber. 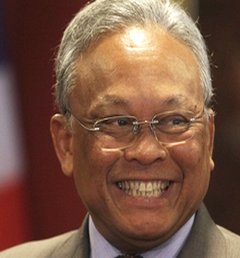 Gen Prayut brushed aside any possibility of talks with Mr Suthep, chairman of the Muan Maha Prachachon for Reforms Foundation, or the Democrat Party.

Both are calling on the government to take action to stop rubber farmers in the South from going ahead with a threat to stage a rally and a hunger strike if their demands for government action to shore up falling prices are not met.

Mr Suthep on Monday urged Gen Prayut, as chief of the National Council for Peace and Order, to invoke his power under Section 44 of the interim charter to solve the problem.

"I lean toward 60 baht [per kg] and the government can start buying at this price, without having to wait for officials to come up with some figures," he said.

"The government can tell related agencies to start buying without going through middlemen. It should also stipulate rubber be used in local projects such as road construction."

Asked what to do if the private sector did not cooperate and would not use more rubber in road construction, Mr Suthep said: "This is not an elected government.

"It arose from special circumstances and this is the time to exercise its special power to help people."

However, Gen Prayut said the current situation is different from that several years ago when Mr Suthep and the Democrat Party succeeded in raising rubber prices.

Asked about Mr Suthep's 60-baht call, he said: "Where's the money? We're building a new system. You don't want a system, do you? You want the government to intervene in every crop, do you? Get me the money."

A network of small planters in the southern province of Trang plans to hold a hunger strike in front of the provincial hall today, while another group is scheduled to hold a forum at the Rubber Authority of Thailand's Trang Office to prepare their demands for government assistance.

Police spokesman Pol Gen Dejnarong Sutthichanbancha said officers will talk with rubber farmer leaders and urge them to wait for the government measures.

Authorities are also cross-checking reports that the farmers have invited Mr Suthep to join their rally.

Democrat member Thaworn Senneam is calling on the government to speed up appointments for the new board of the Rubber Authority of Thailand.

He said rubber planters' confidence can and will be boosted if the government picks qualified people to serve on the board.

Meanwhile, Transport Minister Arkhom Termpittayapaisith said he has instructed agencies concerned to review their road construction projects and see if it is possible to increase their use of rubber.

Under its original plan, the Transport Ministry expects to use 19,301 tonnes of latex in road projects this year.