Prime Minister Prayut Chan-o-cha has warned against a religious conflict erupting following a controversial plan to build a Buddhist park in Muslim-dominated Pattani.

Meanwhile, officials have agreed to change the name of the park with the aim of easing mounting opposition from Muslim locals.

Local officials who initiated the idea and villagers must hold talks to find an acceptable agreement without causing a new quarrel between Buddhists and Muslims, Gen Prayut said Tuesday. He was responding to growing concerns that the 200-million-baht project, a new Buddhist religious venue on 100 rai of land in Muang district, has upset locals who reportedly plan a mass rally against it.

Gen Prayut, who appeared frustrated, said he does not want any more trouble in the insurgency-torn province.

"Has the park been built? Who built it? And did they [the project operator] get permission?" the prime minister asked rhetorically.

Like other projects, if the officials want the Buddhist park idea to materialise, they need to go through legal procedures, Gen Prayut said.

In this case, provincial officials need to inform the Interior Ministry of their plan, he added. He insisted the project had not yet been approved by people in authority. 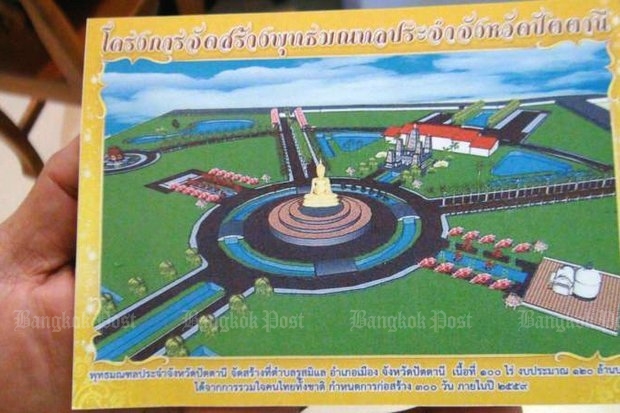 An artist's conception of the 100-rai Buddha Monthon (since renamed) was shown to the media on Sunday.

The idea for the Buddhist park, also known as Buddha Monthon Pattani, emerged in 2002. It will feature a grand Buddha statue and serve as a place for people who seek peace, according to Phanu Uthairat, secretary-general of the Southern Border Provinces Administrative Centre.

"I admit the name 'Buddha Monthon Pattani' may sound too grand," he said. "As people feel uncomfortable, provincial authorities have agreed to change its name to Jedi Ruam Jai park," he said. The new name translates to "the pagoda for the unity of all people".

However, it is not just the name that is causing the controversy. Local Muslim religious leaders and even some Buddhist people are casting doubt over the rationale behind the project. A representative of a Buddhist group in the deep South, who asked for anonymity, said they have little information about the project so it is hard to say whether the park is really necessary.

"We don't know the depth and width of the issue yet," he said, adding more details of why and for whom the park will be built are needed. A lack of information has caused him to wonder whether it would be built for political purposes.

Another source also cited a senior citizen who has warned the project may infuriate Muslims and prompt many of them to wage jihad as a form of protest.

He said nobody wants that to happen in the province, which has been plagued with violence caused by the insurgency.

The source also echoed earlier comments by Waedueramae Mamingji, chairman of the Pattani Islamic Committee, who urged officials to reconsider the project because such a large-scale Buddhist park would be viewed as a sensitive issue among many local Muslims.

In Muslim neighbourhoods, officials need to be aware of local religious sentiments. A Buddha image and pork, which is prohibited in Islam, are sensitive issues, the source said. Authorities who provide Muslims with survival kits during floods even need to carefully check "if instant noodles they give them have pork flavouring", the source added, underlining the precautions they must take when working with Muslims.

On Tuesday, Mr Phanu sought to ease tensions over the project.

He said it is still in the planning stage and the latest meeting concerned project updates. The participants have considered a site in tambon Rusamilae which is not far from the sea.

They also talked about plans to set up a committee to oversee the project, the design of the Buddha statue as well as a move to raise funds by working with Thailand Post Co Ltd to launch post cards for sale.