Karun ordered to pay another 500,000 baht for slander
Thailand
Politics

Karun ordered to pay another 500,000 baht for slander 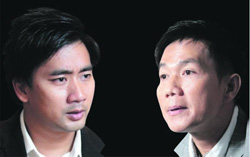 In his suit, Mr Tankhun accused Mr Karun of making remarks construed as insulting and damaging to his reputation at two campaign rallies in Don Muang district on June 3 and 12, 2011.

He said Mr Karun claimed his family descended from hill-tribe people who later changed their surname. Mr Karun also accused him of posing for nude photos for a gay magazine, using money to buy votes and destroying his election banners.

The Appeal Court said the defendant's slander ruined the reputation of the plaintiff who was campaigning as an MP candidate for Constituency 12, the Don Muang area, in the July 3, 2011 poll. It said the MP position was also important in a democratic regime and ruled that Mr Karun pay Mr Tamkhun another 500,000 baht for his affront.

The Criminal Court sentenced the free-speaking politician to 16 months in jail without suspension in January last year. He was released on a 300,000 baht bail and the case is pending in the Appeal Court.

In May 2013, the Supreme Court's Election Cases Division found Mr Karun guilty of violating election laws by making allegations against Mr Tankhun and banned him from politics for five years.